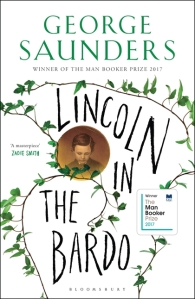 Abraham Lincoln’s young son passed away while he was president, and he spent time in the mausoleum with the body, a very unusual thing to do during this time. There was documentation of Lincoln, of his life and behaviour, and on the death of his son, but apparently much was conflicting. Sanders has fashioned part of this book from quotes from these accounts, and then has created a mystical world full of the dead who have not yes passed to the afterlife.

In this way, it’s a hard book to explain, but as with much of Sanders’ writing, it’s poetic and mysterious and totally wonderful. When I read this, I started a couple of times, but kept putting it down until I could really dedicate time to reading it, because it took me a bit to get into the style. And then I just fell into it and loved it. Sometimes, I didn’t quite get what was happening, and some parts I still didn’t really get until I heard it on the audio book.

If you’re contemplating this book, I would highly recommend the audio book. The cast is amazing  (David Sedaris, Nick Offerman, Megan Mullally, Julianne Moore, Don Cheadle, Rainn Wilson, Susan Sarandon and the list goes on) and the way it has been produced works so well with the text.