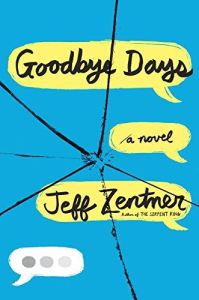 Carver sent a text message to his friend who was driving. He friend sent a message back, however it distracted him from his driving, cashed a crash and killed all three in the car. Carver’s three best mates. And now he is dealing with grief, guilt, being judged by society and trying to figure out what life looks like when you’ve lost almost everything.

I enjoyed the read, with a few good cries, but what it mostly provoked from me was anger. I don’t recall a single person in the book pointing out that the only one to cause the accident was the driver. It was his choice to pick up his phone, plus there were two other people in the car who could have answered the text. Yes, of course it makes sense that Carver feels guilt, but I think we all feel guilt amongst a range of emotions when someone dies. But the idea that all of the things that were covered in this book, no-one said “Gee, that kid shouldn’t have picked up his phone”. It just made me so cross. So cross.