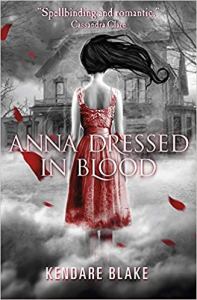 Cas and his mother move around a lot. It’s because of Cas’s mission – he kills ghosts. His father did it, until he was killed. When they arrive in a small town with a spooky house, he finds that it’s not so straightforward. Anna Dressed in Blood isn’t your standard ghost – yes, she kills anyone who comes into her house. But there’s something different.

If you’re into supernatural YA, I reckon you’ll be totally into it. The group that Cas ends up with around him aren’t the typical bunch of mates sorting our problems, but they come together. And who doesn’t like a ghost killer who ends up face more than demons?