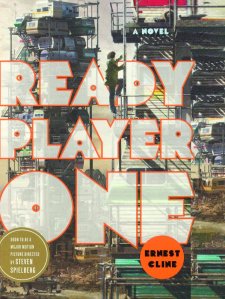 It’s 2045 and the world sucks, big time. Overcrowding so bad that trailers are stacked into… well, stacks in giant slums. There has been environmental disaster. The one saving grace is OASIS, an online world where once you plug in, you can make yourself look however you’d like, and you can attend school and work virtually. No real reason to leave your home. And there’s a competition – one of the creators of OASIS has passed away and left 5 hidden keys and gates somewhere in this online world and whoever gets through first wins billions of dollars and control of OASIS. However, several years in, it’s been going nowhere. Introducing Wade Watts, a high schooler who is obsessed with everything that could help with the challenge, which is everything from the romanticised 1980s. When he finds the first key, things get serious.

I liked the concept, but for me, I got really bogged down in all the 80s nostalgia. The constant references to 80s pop culture are necessary for the plot and I think that will absolutely be a draw for many readers, but I found it quite tedious. It’s been made into a film, and I think I’m going to need to check it out, especially as it’s directed by Steven Spielberg.