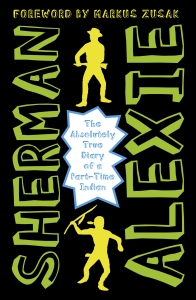 I don’t know a lot about Native American reservations in the US. I know that, like Australia, the first nations people were forced to live in specific places where their culture and population was destroyed by the colonialists. But what does that mean now?

Sherman Alexie’s book, based on his own experience growing up on a reservation, tells the story of a young boy, Junior, born with hydrocephalus which means that he is small and needs to ensure he doesn’t injure his head as it may cause damage to his brain. He also has seizures, needs glasses, stutters and has a lisp. He’s an outcast, but has a close mate, an angry, violent young man, and Junior also loves to draw cartoons and is smart. A teacher convinces him that he needs to get out of the reservation, and so he starts school at the local school 20 miles away, the only Native American in the school.

It’s a fabulous story that deals with so many big issues in a way that shows that these things are many people’s normal. Things like racism, ableism and systemic discrimination, poverty and alcoholism, just being different. And other things like just being a teenager and falling in love. It’s so good, and it’s disappointing to hear that it is a book which is challenged in many schools and libraries because it deals with controversial topics and can be pretty blunt.