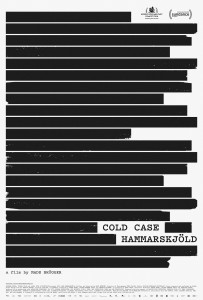 Mads Brugger worked with Swedish Private Investigator Goran Bjorkdale investigate the death of the 1961 Secretary-General of the United Nations, Dag Hammerskjold, who died in a plane accident in the Congo. But was it simply a plane crash, or was it a conspiracy involving a secret army?

It’s hard to know. It appears that there is a lot of compelling evidence pointing to a massive conspiracy, but is any of it authentic? The documentary is so funny, with Brugger dressing up to get into character of one of the key players, consulting secretaries, getting interviews with mysterious characters and doing strange investigations. I walked out feeling like it was all legit, but then talking about it, it couldn’t be. Could it? But really, could it, though?