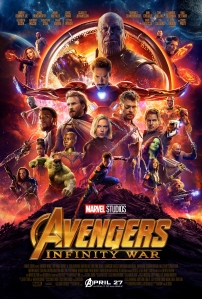 If you haven’t heard the spoilers for the end of this film, I’m not going to be the one to tell you. I’ll just leave it at wow. Thanos (Josh Brolin) the bad guy is back and wants to do bad stuff. And everyone is there to stop him. The usual Avengers, the Guardians of the Galaxy, the lesser-known Avengers. So many superheroes. And I just kind of lost focus. Who was doing what? Have you guys met before? Why do you not like her or him, and should I care that you are doing whatever you’re doing?

I’m sure heaps of people loved this film. I just lost interest… back off, one story at a time. (Although given that I have this personal gripe that if there are that many super-powerful folks, why don’t they all just drop everything when one of them is having a massive battle? Where were you all when Wakanda was threatened, or Asgard or, um, the Dr Strange world? So, when they do actually all come together and it doesn’t really work for me, perhaps I should acknowledge that and keep that in mind next time I watch a film with only one or two superheroes… probs will just keep complaining, though).