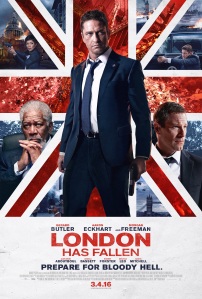 Terrorists are out to destroy all of the major world leaders, so once a major event with all the world leaders attending is going to happen in London, it is their perfect opportunity. US President Ben Asher (Aaron Eckhart) attends, and when things go pear-shaped, luckily Mike Banning (Gerard Butler) is around to save the day. Again. And it is like an action film on steroids. I swear, between this and the John Wick films, I think that the creatives on action films have decided to forgo detailed plot and just have a bad thing happen and lots and lots of fighting, chasing, shooting and all the good things. And there’s another of these ones too. Ace times for action films.