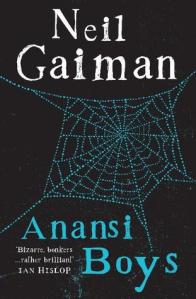 After escaping across the world to start a new life away from his embarrassing father, Charles (known to everyone as Fat Charlie thanks to his father’s influence) is settled into a boring job and engaged to Rosie. But when he finds out that his father is dead and perhaps was more of a god than a person, and then that he has a brother who can be contacted by talking to a spider… well then Fat Charlie’s life starts to get really weird.

This is listed as a sequel to American Gods, but it’s pretty stand-alone. It’s wonderful and strange as can be expected from Neil Gaiman. And it’s also touching and sweet and pretty wonderful. And, if you need anything more, funny and a bit violent and times, and confusing but beautifully crafted.