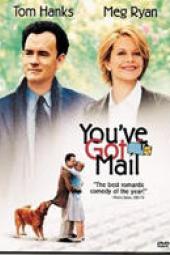 Kathleen (Meg Ryan) and Joe (Tom Hanks) are emailing each other anonymously (in the early days on email and the internet being widely accessible) and are enjoying flirting, despite each being in a relationship. Meanwhile, Kathleen’s bookshop that she loves running, she inherited it from her mother, is about to be put out of business by a super big bookshop opening around the corner. And, of course, the big one is a development by Joe’s company. So, he puts her out of business and then she gets a cold and he brings her soup and then they… fall in love.

In case you can’t already tell, I’m not a fan of this one. I cannot see a world in which one person can wilfully destroy the joyful livelihood of another and that they can ever be forgiven, much less fall in love. And also… it’s Manhattan. I don’t for one second believe that both shops could exist happily. I’m not the hugest fan of romantic comedies because I think that they are often just pretty shit and generally treat women pretty poorly. But sometimes, they are truly awful, and this is one of them.