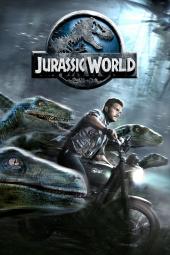 The park that was planned back in Jurassic Park now exists and is super popular. But it’s capitalism, and so everything needs to be bigger and make more money, no matter the risk. Of course. So when the creature spliced from multiple DNAs is clever and kills for fun, everyone’s in trouble.

The action is great. There’s a big water creature, and pteradactyls and all kinds. But the film has one massive flaw (well, I’m sure there are more than one, but this was the one which was particularly glaring for me)… it’s by a long way far more misogynistic than the original. The main female character, Claire (Bryce Dallas Howard) is just awful. Yes, she gets to come into her own at the end, but only after being incapable in pretty much every aspect of her life up until that point. There’s another woman who basically cries every moment she’s on screen, and the other few women barely get screen time. There are heaps of men. There are even a couple of non-white men (although really, diversity is not this film’s strong point). But god forbid in 2015 women should be capable at all. Bloody hell.