Virginia Woolf (Nicole Kidman) is battling her mental health issues and attempting to write Mrs Dalloway. Laura Brown (Julianne Moore) is a mother of a small child, pregnant to a second in the 1950s, reading Mrs Dalloway and struggling with depression. Her doting husband Dan (John C Reilly) seems to not notice how much she is struggling, even though her small child, Richie (Jack Rovello) seems acutely aware of it. Clarissa Vaughan (Meryl Streep) is a woman living in present-day New York who is throwing a party for her closest friend, Richard (Ed Harris) who has just won a literary award. He is ill with AIDS and between the illness and the medication, he is not mentally all that aware of what is happening around him. A long-standing joke between them is that he refers to her as Mrs Dalloway.

The film is beautiful and tragic and wonderful and only ruined by one thing – that nose. Nicole Kidman has a prosthetic nose, presumably because she is considered to beautiful to portray the plain Virginia Woolf. Bullshit. She does some decent acting here, but it is all taken away by the constant staring at that stupid lump on her face. If they really couldn’t handle having her with her normal face playing the role (and hey, if they wanted to make her Hollywood ugly, doesn’t she just need a frumpy dress, bad hair and glasses?), then perhaps they should have cast someone plainer. The whole nose thing made me so angry, because it treats the audience like morons. Grrr.

If you can get past the nose, do. Oh, and the unrelenting, too loud and melodramatic soundtrack. All three storylines have pain and sadness and so much depth in a short amount of time. The supporting cast is pretty fabulous as well, but it is the three main women who carry the weight of this heavy film.

It’s an interesting film. There are scenes where the action happens in the distance, but the sound is of the events that are happening just off camera – conversations, fights, music, even just roadworks. And other scenes where dialogue is happening but the vision is something totally else. It’s strangely beautiful and mysterious. Unfortunately, for me, I feel like Anna Paquin is just so closely tied to Sookie that I found it very difficult to buy her as anyone else. There is a scene early on with a lot of blood and high emotions, and I couldn’t help feeling that it was all a bit True Blood. And once I got that in my mind, I couldn’t get it out of my mind.

I liked it for the first, perhaps, two hours, but then I just got fed up with the drama that Lisa creates all around her, and the way people either confront her or just go along with her drama. By the end I just was fed up with it all.The accident scene was wonderful, made so in part by the wonderful Allison Janney. And the cast in general is very impressive, with Mark Ruffalo, Jean Reno, Kieran Culkin, Matt Damon, Matthew Broderick.

Who’d have thought that a musical based on a film by controversial filmmaker John Waters could become both a Broadway and Hollywood hit? What’s more, it’s a musical about issues; body image and racism in particular. Tracy Turnblad (Nikki Blonsky) is a chubby teenager in Baltimore in the 1960s. She loves rock’n’roll, loves to dance and is desperate to get on local television dance show the Corny Collins show. Her attempts are initially thwarted by star of the show Amber Von Tussle (Brittany Snow) and her evil mother, Velma Von Tussle (Michelle Pfeiffer) but eventually she wins through and wins the affection of her crush, Link (Zac Effron). Once on, though, she discovers that she cannot handle the whiter-than-white station, and after meeting local African American dancer Seaweed (Elijah Kelley) and Motormouth Maybelle (Queen Latifah), she must stand up for what’s right.

The music is great. Just writing about the film brings back so many of the songs (Welcome to the 60s, You Can’t Stop the Beat, I Can Hear the Bells, Good Morning Baltimore  to name but a few). There is still a hint of John Waters dark humour in there, but it is an upbeat, fun film. Bright colours, superb cast, (not least John Travolta playing the extremely large Edna Turnblad and Christopher Walken playing the naïve and loving Wilbur). Sure, it’s a musical, but its one of those musicals that I just love.

Surely a film about a fourteen-year-old boy who strikes up a friendship with a man in forties who refuses to grow is going to be a bit creepy? Well, apparently, no. This film has its creep factor, but amazingly, that’s not it.

Duncan (Liam James) is taken away for the summer with his mother, Pam (Toni Collette) to the holiday house of her boyfriend, Trent (Steve Carrell).  Trent’s daughter races off with friends, leaving Duncan to find his own way. So while Pam and Trent and enjoying drunken, stoned nights with vivacious neighbour Betty (Allyson Janney) and other friends, Duncan forms a friendship with the manager of the local water park, Owen (Sam Rockwell).  Owen gives Duncan a job where he starts to come out of his shell with the help of a strange group of employees.

This cast is filled with some of my favourite actors. In fact, I think I love little more in life than seeing Steve Carrell play a nasty character – and boy is Trent nasty. He bullies everyone around him, but comes across as jovial. The scenario is so well-played that I wanted Duncan to just leave, and had to remind myself that he is a fourteen-year-old boy. Where would he go? His desperation at times was so intense, and I found myself in tears several times. What a good sign that is.

Lester Burnham (Kevin Spacey) tells us in the opening of the film that within a year, he will be dead. He is a loser; stuck in a disintegrating marriage with Carolyn(Annette Bening), with a grumpy teenage daughter, Jane (Thora Birch) who has no respect for either of her parents and a job he hates. He is deeply unhappy. Then he meets his daughter’s cheerleader friend, Angela(Mena Suvari), who he develops an infatuation with. Also, a new family moves in next door, and the strange teenage son starts selling Lester pot. Before you know it, his life is turned around and then, true to his earlier statement, he dies.

I taught this film over several years and found that each time I watched it, I enjoyed it more and more. It is such a beautiful film – every second is perfectly constructed and every shot contains a wealth of information to tell the story. The performances are beautiful, with each character’s strengths and vulnerabilities revealed. 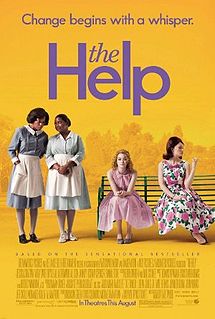 It’s the 1960s and Skeeter Phelan (Emma Stone) has returned to her home in Jackson, Mississippi after completing college. She takes a job at the paper writing a cleaning column, however having had a maid throughout her life, she needs help. Enlisting the assistance of one of her childhood friend’s maids, Aibileen, she becomes aware of the attitude of the rich, white families to their staff. Surreptitiously, she collects the stories of the maids which is published in a book that becomes a best seller, but which promises to shock all of Jackson.

It’s a good film. (I’ve heard that the book is marvellous, and someday, I will get to that). It has heart and struggle. Look, I’ve seen a lot of films that tell stories of the deep south prior to the civil rights movement, and this isn’t one of the most hardhitting. It’s entertaining and it tells a good story. Does it need to be more than that?