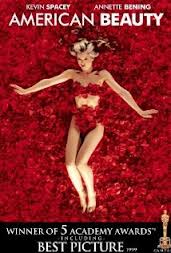 Lester Burnham (Kevin Spacey) tells us in the opening of the film that within a year, he will be dead. He is a loser; stuck in a disintegrating marriage with Carolyn(Annette Bening), with a grumpy teenage daughter, Jane (Thora Birch) who has no respect for either of her parents and a job he hates. He is deeply unhappy. Then he meets his daughter’s cheerleader friend, Angela(Mena Suvari), who he develops an infatuation with. Also, a new family moves in next door, and the strange teenage son starts selling Lester pot. Before you know it, his life is turned around and then, true to his earlier statement, he dies.

I taught this film over several years and found that each time I watched it, I enjoyed it more and more. It is such a beautiful film – every second is perfectly constructed and every shot contains a wealth of information to tell the story. The performances are beautiful, with each character’s strengths and vulnerabilities revealed.