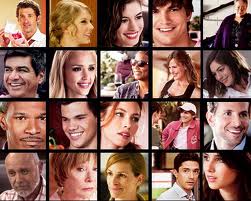 I’m not going to try to recount the plots – there were just so many intertwining. All you need to know is that in LA on this particular Valentine’s Day, heaps of people interact. Some get together, some don’t, some break up, some rekindle their love. It’s gentle and fun and has a huge cast. If you get sick of the stories, you can spend some time trying to name everyone in the film. This is a great film to know for playing 6 Degrees of Kevin Bacon.

This is one of the worst films I have ever seen. It’s just awful. And it’s long, or at least, it feels incredibly long.

As a child, Evan had moments of blacking out. He would lose anywhere from a minute to a few minutes, waking up unaware of what had happened. Each of these moments had an event of some significance happen, from a letterbox prank gone wrong, to a dodgy home movie by a friend’s dad. Starting college, Evan discovers that he can go back into these moments by reading the diary he kept as a child, and whilst there, he can change events. But oh no! It’s a disaster!

The start of the film may have you fooled – the kid actors are pretty good, and the idea of this kid blacking out is kind of interesting. And then, in comes Ashton Kutcher. Ashton Kutcher is awesome in That 70s Show, and it’s entirely possible he’s done other great things. I don’t know, I haven’t followed his body of work. In this, he is appalling, but it’s not just him. The script is terrible, especially the ending. I cannot think of any redeeming features of the film. Oh, ok, one – the reappearance of Eric Stoltz. Admitedly as a creepy pedophile, but still. At least that’s something. Don’t watch it. Ever.