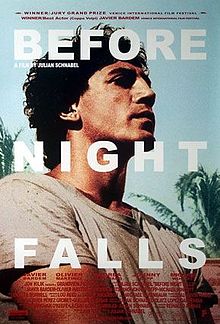 Before Night Falls is based on the autobiography of Cuban poet Reinaldo Arenas. Arenas was born in rural Cuba, and as a teenager joins the revolution. However, after moving to Havana to continue his studies, he finds that the new political climate does not agree with his homosexual lifestyle and both he and his writing is under threat.

It is a very beautiful film, presented with the poetic style of Arenas’ writing. I know little of Cuba and the revolution, and had not heard of Arenas prior to this. Having seen the film, I am now very interesting in exploring his writing. Javier Bardem is wonderful in the film, as he so often is. My only confusion was the use of language in the film – much of the film was in English, but I could not see why. Or at least, why it was not consistent – either consistently in English, or consistently in Spanish. Still, this did not take away from the film at all.

Javier Bardem was nominated for an Oscar for Best Actor in a Leading Role for his performance.