It’s a film about the Tenenbaum family. Enough said, really.

This is still my favourite Wes Anderson film. It’s got all the strangeness in character and plot, all the beauty in the art direction and cinematography and all the humour, heart and tragedy that I love in these films.

How do you deal with making a film about a daring rescue of a soldier from the enemy camp during the Vietnam War when your cast is a group of over-paid spoilt brat actors who are more interested in their own careers than the film they are working on? Chuck them in a jungle filled with landmines and hidden cameras and see what happens.

I hated this when I first saw it, and there are still several scenes that seriously shat me watching it again, but I can let go of these and enjoyed the rest – the way the characters are set up to be overly earnest, or taking themselves far too seriously beyond what is acceptable, and then to have them called out on this – it’s a film that surprises me by having a layer that I hadn’t really seen first time around. Provided you can get past the dumb bits.

Evan (Ben Stiller) is an uptight guy living an ideal life in the nice suburbs when one of his employees is killed during the night shift. So he starts a Neighbourhood Watch group. Cue: a bunch of misfits: Bob (Vince Vaughan) an overprotective father whose wife is travelling for work a lot, Franklin (Jonah Hill) a high school drop out and Jamarcus (Richard Ayoade) an odd Englishman. In searching for the killer, they come across aliens and sex parties and all kinds of strange stuff.

This film is both terrible and nowhere near as terrible as I expected it to be. The whole alien thing seemed to be totally ridiculous, but I actually quite liked where they went with it. However, I was totally distracted most of the way by Ben Stiller’s extreme tan. Yes, he was the leader of the running club, but there seems to be way too much colour on that man’s face.

After his world was destroyed, an alien was sent to Earth. Just like Superman. Only, not unlike Superman, there were two babies. Megamind (Will Ferrell) a blue creature who just cannot quite get it right, and Metro Man (Brad Pitt), a real Superman type. As children, Metro Man always won over Megamind, and Megamind decides, along with Minion (David Cross), he decides to be a real villain. He falls into a routine with Metro Man – he kidnaps Roxanne Ritchie (Tina Fey), Metro Man saves her and they go on. But one day, he kills Metro Man, and their world is turned upside down. Depressed, Megamind realises he needs a foe to continue, and he makes Titan (Jonah Hill), the hero. But nothing goes quite as expected.

It is a fun film, but it was only when I got about three-quarters of the way through when I realised that I had seen it before, so it clearly did stick in my mind. Good points? David Cross is fabulous as Minion, the strange fish companion. The character of Roxanne is being saved a lot, but there is a lot more to her. She still is the only significant female character, which is a shame. And I love that Megamind mispronounces everything. 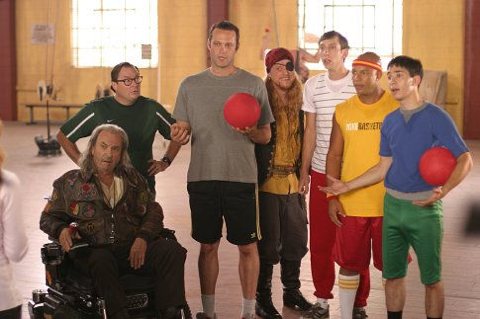 Geez, isn’t Peter La Fleur (Vince Vaughn) a top bloke? He runs a gym for a bunch of losers and doesn’t even charge them, has no ambition and just lives for, I don’t really know. Fun? He has sex with ladies, but other than that, he doesn’t seem to have any interest in anything ever. Then there is White Goodman (Ben Stiller), a man so stupid he cannot spell his own name, who was incredibly obese and disgusting (eating food semi naked and letting it drip all over his fat chest and belly), but who lost weight and became obsessed with looking good and bullying others into looking good at his gym. Wow, what a prick, having drive to succeed and achieve. So then, as revenge on Peter for having sex with a couple of White’s sexy trainers, White takes out a mortgage on Peter’s gym (is that legal?) and when Peter is going to default, the only possibility is to raise money, and they only way they can do that is a dodge ball contest. Of course.

I didn’t realise until I started writing the above quite how much I disliked the premise for this film. I’ve mentioned before that I am often disappointed by Vince Vaughn, and he’s fine in this, just quite boring. Not offensive, just boring. Ben Stiller is a bit the same for me – I can absolutely hate him in some things, and love him in others. This is a hate for me – there was not enough comedy in his White Goodman, he was just nasty and self-obsessed and pretty crap.

Having said all that, I really liked the dodge ball tournament side of things – ridiculous, and with wonderful commentary from the ever fabulous Gary Cole and Jason Bateman. It is almost worth watching just for the commentary. Not quite, but almost. 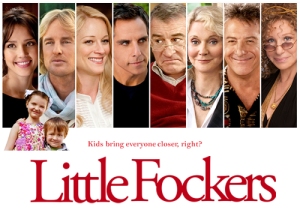 The ensemble is back; first, it was meet her parents, then meet his. Now, there are kids and they are having a birthday party, but things go astray. And crazy astray.

I was on board for the first two. Yes, there were a few things that I needed to suspend my belief for, but I went with it. But for this? They lost me totally. From the moment Jessica Alba arrived as a drug representative and stepped in for a bottom-related procedure in the hospital, it lost me. Not even a fist fight between Robert De Niro and Ben Stiller across a series of kids equipment was worth it.

Now that peace has been made between Greg Focker (Ben Stiller) and his soon-to-be-wife Pam’s (Teri Polo) parents Jack (Robert De Niro) and Dina (Blythe Danner), they must meet his family. They are far from ‘normal’ – sex therapist Rozalin (Barbra Streisand) and house-husband Bernie (Dustin Hoffman). Of course, it is a whole weekend that they must have to get the maximum ridiculousness of the situation.

It is totally silly, much like the first. And while it is a similar creature to the first, it is different. Not better, really, and not worse as such. Actually, probably a bit worse. But adding Dustin Hoffman and Barbra Streisand was just a nice addition. If it’s on telly and you can bear slapstick, go for it. I wouldn’t race to hire it, but I also wouldn’t switch channels. 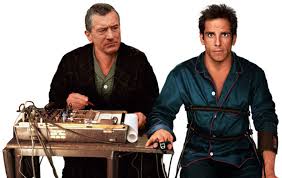 Greg Focker (Ben Stiller) is in love with Pam Byrnes (Teri Polo) and wants to marry her. But, her parents are traditionalists, and so he must meet them and win them over. Her mum (Blythe Danner) is fine, but her father (Robert De Niro) is a real hard-ass; ex-CIA and very protective of his family. What’s more, they are spending the weekend together for her sister’s wedding, so there is extra pressure. Of course, everything goes wrong, including the fact that Pam’s ex-boyfriend Kevin (Owen Wilson) who is wealthy, talented and charming is involved heavily in the family’s life.

A lot has been made over the years of De Niro’s move from serious acting through to comedy, and generally, he is heavily criticized. I’ve not seen all the films, but I really like this role and this character, and I think that the way he and Stiller work together is terrific. I didn’t expect to enjoy this film all that much, but I really did. Quite a lot, as it happens, even despite the ridiculousness of it.

Walter Mitty (Ben Stiller) works in the photography department at Life magazine. He has a crush on fellow worker Cheryl Melhoff (Kristen Wiig) but is too shy to talk to her, and drifts off into his own dream world every so often. However when he is informed that the magazine is going to close, led by the nasty pasty Ted Hendricks (Adam Scott),  the renowned photographer Sean O’Connell (Sean Penn) sends a role of slides containing the photography he considers to be the best he has ever taken. Only, that slide is missing, and Walter steps out of the security of his safe life to search for the slide… and himself.

I expected to hate this film. I expected that it would be a bit corny and tedious, and predictable. Well, it was kind of all of those things, but it was also beautiful and thoroughly enjoyable. The only real problem I had was Adam Scott’s beard – it was just horrible.