Post – RED, Frank Moses (Bruce Willis) has well and truly hooked up with Sarah (Mary-Louise Parker) and they are living, well, some kind of a life. He’s fearful, she’s bored. Then Marvin (John Malkovich) turns up dead; at least for a moment, and Victoria (Helen Mirren) is charged with killing them, and it’s on. Awesome times. And then add in Bailey (Anthony Hopkins) and you’ve got a fabulous romp.

I absolutely and totally loved this. I love the humour, I love the action, I love the casting, and I kind of hope they made more, but I suspect they won’t. Wait… According to IMDB, Red 3 is in development. Yes!!! 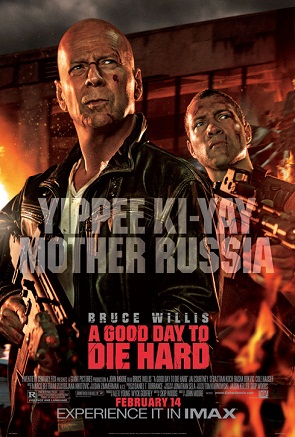 John McClaine (Bruce Willis) finds out that his estranged son, Jack (Jai Courtney) is in Russia, some issue with arrests and drugs and not good things. So, he goes to resuce him. Of course, John McClaine’s son could not be simply a drug smuggler or whatever – he’s a spy and John messes up the mission. Or does he?

Die Hard, the original, is still one of my favourite films – certainly, it’s my fav Christmas film. And I really liked the second film, with all the airport stuff. The third? Brilliant. The fourth, oh, I thought it was all over. It was pretty awful. So I’ve really avoided this one: until now. And now, I really regret not seeing this one in the cinema, because it was ace. I loved the fact that John McClaine’s son has grown up to be Jai Courtney, and he’s fabulous in this flick. There was comedy, there were explosions, there were double crosses (and, as per, very little good female characterisation). And hey, remember the Cold War, when Russia was always the bad guy, and then the US and Russia made up and they had to be good again? Time must have healed all wounds, because we’re back in Russia! Yeah!

Loved it, and am looking forward to the next one, Die Hard Year One. (Though really, that title? Or this one, for that matter? Or the previous? Oh, come on)

So, John McClane (Bruce Willis) gets sent to pick up a hacker for the FBI just as the world starts to fall apart. But the hacker is Matt Farrell(Justin Long) and he is charming but also knows a whole heap of stuff, and it comes down to them saving the world. And McClane’s daughter, Lucy(Mary Elizabeth Winstead). Even if it means throwing police cruisers at helicopters.

I’ll get it out of the way. Women in this film. Again, we have the sexy woman who is actually just an evil henchman. So much more could have been done with her character. And then there is the daughter. At least she had some of her mum’s personality, so there was almost hope. But there was some really nasty misogynistic language in the film that I found quite unnecessary and horrible. Yes, punch the evil chick in the face. But do you need to call her so many horrible things before you do it? You wouldn’t have if she were a bloke.

What this really lacked from the previous films for me was the realism and the humour. By realism, obviously, Die Hard is not some kind of realist drama. But the level of ridiculousness – in the three previous, I could buy it. Die Hard 4.0? Nup. Plus the good humour has gone, and even having a ‘kooky geek’ character wasn’t enough.

John McClane (Bruce Willis) is on suspension, separated from his wife and hungover when he gets dragged back into a work. A bomber has attacked and is threatening further attacks unless McClane is about. On the first of a series of tasks that he is sent on, McClane meets Zues Carver (Samuel L. Jackson) and they are linked for the rest of the film. But are the tasks of Simon Gruber (Jeremy Irons) all they appear to be, or is there more going on?

To begin with, it is an ace film. Willis and Jackson have a great bro-chemistry going on. And I love Jeremy Irons. But guys, come on. A couple of women would be nice? Now you’ve gotten rid of McClane’s wife, who had personality and a bit of drive. The only chick pretty much in the whole film is Katya (Sam Phillips), a side-kick to Gruber. She is violent and handy with a knife, so some may think she is a strong woman. Don’t be fooled! She does not utter a word throughout the entire film, and is there just to be a tool for the bad guy. She is a pet. A bit more imagination and she could have been the bad guy. Or what about a woman as one of the main police folks? I love Graham Greene, but his role could easily have been a woman. Even Zeus’s nephews could have been nieces? Something tells me moving in to the more recent Die Hard films may get me even grumpier.

Die Harder. Fabulous. So, John McClane (Bruce Willis) is picking his wife up from Washing Airport where they are visiting her parents. But there is also a really dodgy terrorist being flown in for some reason. And it is the middle of the Christmas rush (Christmas Eve to be exact). Of course, there are several cop-like authority figures who don’t trust McClane’s instincts and end up looking like fools. And then the terrorists start doing awesome and awful things, like making a whole plane crash-land on purpose. Planes are left circling, waiting to land, and fuel is running out. And there is a wise old African-American man who can solve many of their problems, if only someone would listen.

Yup, still wonderful. Action galore, massive explosions, running and desperation and that great dialogue. Just… wonderful. And Holly still gets to be a bit kick-arse, so that’s nice. Oh, and look out for a young John Leguizamo and Robert Patrick amongst the cast. Nice. 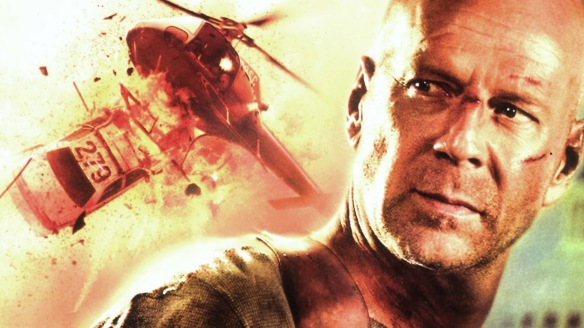 WHAT?  You haven’t seen this film? Stop reading, go to your local video shop or find some way to watch it online, whatever you need to do. But you need to meet John McClane (Bruce Willis) and you need to see him saving the hell out of his wife, Holly (Bonnie Bedelia) and ruining the plans of Hans Gruber (Alan Rickman), one of my favourite baddies of all time.

It’s just wonderful – a great action film with some great lines, cool shooting and running and awesome explosions, and a reminder of a time where things seemed a bit more innocent. For example, can you imagine now if a guy identifying as a NY Cop said he was in a building that had been taken over by terrorists? The response would be unlikely to be ‘stop wasting our time and resources. Fine, we’ll send a desk cop on his own, and then he can be the only one to trust you’. Times have really changed. Oh, and there aren’t many women in it, in fact, I think it is just the wife character, but she is a bit tough. Sure she needs saving, but there’s only room for one real hero. But she’s not bad.

PS, this is my favourite Christmas Film.

After receiving an award for his work in psychology with children, Dr Malcolm Crowe (Bruce Willis) and his wife Anna (Olivia Williams) are attacked in their home by one of his former patients, Vincent Grey (Donnie Wahlberg). Several months later, Malcolm feels he cannot connect with his wife and has lost his work mojo. Then he meets Cole (Haley Joel Osment), a nervous young boy who reminds him of Vincent, living with his wonderful mother, Lynn (Toni Collette). But when Cole reveals that he sees dead people, Malcolm has a challenge that, if he can sole, may bring him peace of mind.

Do I give away the spoiler? Along with the revelation of what Rosebud is in Citizen Kane and the big secret from The Crying Game, it has to be one of the most quoted spoilers of all time. Just for that, I’ll keep schtum. It is most certainly worth watching. It is tense and freaky and so very, very sad. Watch it. If you haven’t seen it, you really must.

Based on the Frank Miller graphic novel of the same name and filmed almost entirely against green screen, Sin City takes a dip into the sordid world of Basin City. This is a world with pedophilia, prostitute wars and corrupt cops.

Along with general action films, I really like the genre of films made from comics and graphic novels. Sin City takes this to a whole new level. The entire look of the film is like a dark comic strip, with lots of dark shadows and limited use of colour. What’s more, it is extremely and horrifically violent, but in a way that, even though it is clearly fake, it is uncomfortable to watch. I think this is a truly wonderful film, and I’m very excited to see that another Sin City is due to be released next year.

Ben (Robert De Niro) is a film producer whose latest film, staring Sean Penn (playing himself) tests poorly – especially the killing of a dog at the end. He needs to fix it, which takes all kinds of maneuvering. On top of this, he is dealing with the end of his marriage with Kelly (Robin Wright), his teenage daughter Zoe (Kristen Stewart). Plus, the star of his next film, Bruce Willis (also playing himself) has grown an ugly beard and will not listen to pleas to sort himself out before shooting. Even his manager, Dick Bell (John Turturro) cannot sort it out (in-between his serious stomach issues).

It’s a film that is full of stars and Hollywood inside stuff, and I reckon that it is entirely possible that people within the industry would relate to it a lot, even if they may not like it. Me? I found it a bit interesting, and somewhat entertaining, but it didn’t totally grab me. 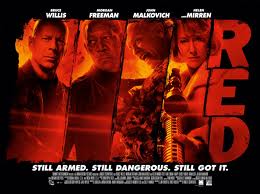 Frank Moses (Bruce Willis) is retired and living a quiet life. His favourite thing to do is flirt with call-centre worker Sarah (Mary-Louise Parker) – until he is forced out of retirement. He is an ex-assassion, now categorized as RED – Retired Extremely Dangerous. To get his freedom, he needs to assemble a team of other REDs including Joe (Morgan Freeman), Victoria (Helen Mirren) and Marvin (John Malkovich), dragging Sarah along with them.

I loved it. I loved seeing Helen Mirren wielding a machine gun and just all the running and shooting and explosions, humour, of course, and Bruce Willis doing what he does best. Kicking ass.