Who’d have thought that a musical based on a film by controversial filmmaker John Waters could become both a Broadway and Hollywood hit? What’s more, it’s a musical about issues; body image and racism in particular. Tracy Turnblad (Nikki Blonsky) is a chubby teenager in Baltimore in the 1960s. She loves rock’n’roll, loves to dance and is desperate to get on local television dance show the Corny Collins show. Her attempts are initially thwarted by star of the show Amber Von Tussle (Brittany Snow) and her evil mother, Velma Von Tussle (Michelle Pfeiffer) but eventually she wins through and wins the affection of her crush, Link (Zac Effron). Once on, though, she discovers that she cannot handle the whiter-than-white station, and after meeting local African American dancer Seaweed (Elijah Kelley) and Motormouth Maybelle (Queen Latifah), she must stand up for what’s right.

The music is great. Just writing about the film brings back so many of the songs (Welcome to the 60s, You Can’t Stop the Beat, I Can Hear the Bells, Good Morning Baltimore  to name but a few). There is still a hint of John Waters dark humour in there, but it is an upbeat, fun film. Bright colours, superb cast, (not least John Travolta playing the extremely large Edna Turnblad and Christopher Walken playing the naïve and loving Wilbur). Sure, it’s a musical, but its one of those musicals that I just love.

It’s small town, Pennsylvania during the Vietnam War. A group of friends have signed up, and just before they leave, one gets married and they go on one last hunting expedition. In Vietnam, they are captured and tortured by the Vietcong and those who return are not the same.

Grueling. This is the type of emotion that most films which I categorise as sadtacular are aiming for. Sometimes they get it, sometimes they get close. But this is the real deal, and it is amazing. Long, grueling and heartbreaking.

Don’t ya just love going in to a film not knowing anything about it or anything to do with it? It is a total hit or miss, although I find that even a really bad film is better if it is unexpected. Seven Psychopaths was totally a hit.

From Martin McDonagh, writer and director of In Bruges, Seven Psychopaths is just that – a film about seven psychopathic people. Or more specifically, a film about Marty (Colin Farrell), an alcoholic screenplay writer who is trying to write his new film, titled Seven Psychopaths. As he does this, the relationship with his Australian lover, Kaya (Abbie Cornish) is struggling as he spends too much time with his actor friend Billy (Sam Rockwell). Then things get complex.

There is so going on in the plot of this film that it is really difficult not to mention anything further without major spoilers. It is very violent, but very funny. Really and truly laugh out loud funny. The dialogue is extremely amusing (comparable to the wit of Reservoir Dogs, only less like a stand-up comedy routine, and more like conversations that real, witty people might have.

For me, the film was carried by Sam Rockwell, although I have to mention the performances of Woody Harrelson and Christopher Walken. Harrelson is so strong and funny, and Walken is magnificently understated.  Harry Dean Stanton and Tom Waits and I’m pretty happy. As long as you don’t mind a bit of violence (including some very hilarious violence), get out and see this film.

Free-to-air television recently screened all of the Bond films. Just in case you were wondering why I’ve been making my way through them lately. I’ve been enjoying most of them – it doesn’t bother me that they are a bit cheesy, and I can even forgive the sexism – just so long as there are good gags, fast car/boat/plane/ski chases and awesome bad guys. I’ve been loving Sean Connery and Roger Moore, and was wondering why people don’t like Roger Moore as Bond. Then I watching A View to a Kill. Oh, it’s terrible.

There is some suspicion about a racehorse, so Bond (Roger Moore) goes to the private property of Max Zorin (Christopher Walken), a tycoon who is using chemical enhancements to win races. Bond discovers that there is more than meets the eye, and whilst managing to avoid being killed by May Day (Grace Jones), traces the plot back to a mine and a plot to flood silicone valley. Then there is a blimp, the Golden Gate Bridge and *yawn* other stuff.

Durran Durran were nominated for Best Original Song for A View to a Kill.

All my love for Adam Sandler has gone. I’ve stuck up for him often, saying I quite like his films, saying they are not totally puerile with stupid, sickly sweet stories that are stupid. But I was wrong. At least, for those I have seen recently. Click is ridiculous and dumb. I hated it.

The idea is that there is a workaholic father who is aiming for a promotion in his company. Of course, this is coming at the expense of his relationships with his family. Plus, despite being a totally capable person, he cannot figure out which remote operates what in his house. Then he meets Morty (Christopher Walken) who gives him a universal remote control, however, it actually controls the world around him, not the appliances. Suddenly, he is skipping through most of his life and then he is really fat and divorced with a slut for a daughter. Yup. That’s where it went. And then (spoiler alert, but really, don’t watch this film!) it was all a dream! Um, really? Is that really what you are going to do with a film that was made in 2006? Really? Unbelievable. Just so bad. 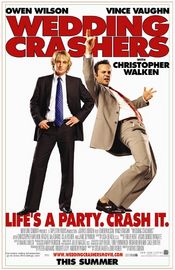 Two adult men crash weddings to get laid. Then one falls in love.

That’s about it. It’s pretty terrible. Vince Vaughan is very funny for part of it. There are a lot of overly long and tedious montages, including one with Owen Wilson and Rachel McAdams being cute of bikes. It’s really dumb. I hated almost all of it.