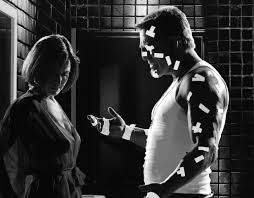 Based on the Frank Miller graphic novel of the same name and filmed almost entirely against green screen, Sin City takes a dip into the sordid world of Basin City. This is a world with pedophilia, prostitute wars and corrupt cops.

Along with general action films, I really like the genre of films made from comics and graphic novels. Sin City takes this to a whole new level. The entire look of the film is like a dark comic strip, with lots of dark shadows and limited use of colour. What’s more, it is extremely and horrifically violent, but in a way that, even though it is clearly fake, it is uncomfortable to watch. I think this is a truly wonderful film, and I’m very excited to see that another Sin City is due to be released next year.

2027. All of the people in the world are infertile. The youngest human, eighteen-year-old “Baby Diego” has just been killed and everyone is mourning. Theo (Clive Owen) is suddenly and violently approached by his ex-wife Julian (Julianne Moore) to assist in getting Kee (Clare-Hope Ashitey), a young, pregnant woman to safety.

It’s an amazing thought – the human race dying out not from illness or disease but just not being able to make more. What drives people as a species to keep going? And what would really happen to the miracle – the occasional person who falls pregnant? This is not an easy film to watch. It’s violent and emotional and does not pull punches at any time. But it is wonderful, and beautiful, and I hope that I have the guts to watch it again sometime.

In Elizabeth, we saw Cate Blanchett play Elizabeth I as she came to the throne and had to battle with those who wanted to take the crown from her. In this sequel, Elizabeth has transformed herself into Elizabeth the Virgin Queen and is leading her people, still avoiding the question of marriage, still battling those who want to take her throne, and still battling her own emotional attraction, this time to Sir Walter Raleigh.

It was made nine years after the first film, which means we can avoid unnecessary aging make-up for the cast. I didn’t enjoy this as much as the previous film. I felt that some of the emotion that Elizabeth struggled with seemed more suited to the younger, more naïve Elizabeth. Perhaps this was an attempt to give the queen a human side, but I felt that it brought little to the character for me. Again, as with the first, I am not sure on the historical accuracy of this film. It is a fascinating time, but I can’t help suspecting that in dramatizing the story for film, that it is entirely possible that the story has been modified in many ways. I would be very interested in watching it again after reading about Elizabeth, or perhaps seeing an interesting and informative documentary. Any suggestions?