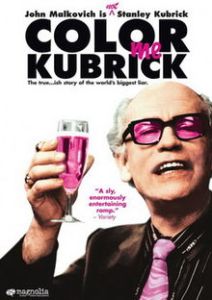 Alan Conway (John Malkovich) was a con-artist who posed as Stanley Kubrick in the 1990s, taking money and goods from many people. Despite knowing little about Kubrick, he managed to get by because Kubrick was such a recluse and people didn’t have the internet to find out more.

This is an interesting film – Conway sounds like an amazing character, and Malkovich depicts him as a shameless man who took everything in his stride. I found the structure of the film a bit odd as though it needed to be rewritten a bit, or perhaps reedited. But what I really enjoyed was that it used a lot of the music that was iconic in many Kubrick films – for me, mostly notably 2001: A Space Odyssey and A Clockwork Orange. Very nice.