Don’t you love it when you are at the DVD shop, bump into a friend, get a recommendation for a film you’ve never heard of, take it home and discover that it is awesome? Underground is most definitely one of those films for me. Set in the 1940s when the Nazis invade Yugoslavia, Underground is an epic comedy that spans more than twenty years. It follows two main characters – Blacky(Lazar Ristovski) and Marko(Predrag Manojilovic), drunken clowns who stumble their way through the bribery and corruption that inevitably occurs during times of conflict. Both are in love with actress Natalija(Mirjana Jokovic). After the Nazis invasion, much of the town runs an underground resistance from a cellar in town. However, they are totally cut off from the world.

I don’t want to give away too much of the plot – it is at times absurd and somewhat insane, but often very hilarious, even during the darkest moments. And the magnificent accompaniment of a brass band – this is how I want to live my life. It’s really worth watching just for the opening sequence, with the two drunken men being carried home in a cart, followed by the brass band. Marko throws money at the band while Blacky randomly shoots at them. Insane and wonderful.

It’s fast paced, it’s surreal, it’s musical and it’s amazing. Sam Simmons has a knack for grabbing the audience and taking them on a sprint – forget about the relaxed journey with its slow reveals and gentle nature, this is more like being punched lots, but funny punches that don’t hurt. Sort of. Unless you’re the guy on the spinning chair. I reckon that probably hurt a bit.

Click the image above for ticket and show info 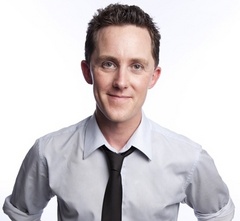 I love it when Michael Chamberlin gets angry, like comedy angry. He seems like such a placid guy who’s just chilled and relaxed, but man he gets really pissed off and then he shouts and goes read and a little vein pops up in his neck. It’s pretty funny. This is a really well crafted show which takes the audience on a journey which is kind of about his growing up, or not. As a fellow thirty-something who is about to move back into a share house after many years of living on my own, some of this seemed a bit too familiar.
Click the image above for show and ticket info

I find Claudia O’Doherty’s charm completely distracts me from realising what an insane journey she is taking me on until it is too late and suddenly I’m watching a love-story across time through a magical telescope with some of my favourite ever video clips and strangeness. There’s no doubt that this is not everyone’s cup of tea but I think she’s fabulous and can just keep on with what’s she’s doing, thanks very much.

Click the image above for show and ticket info