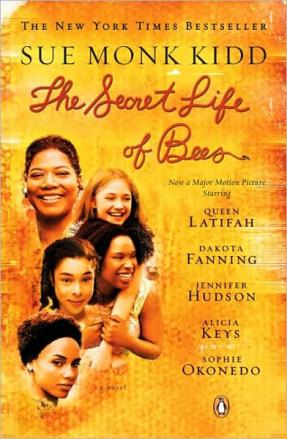 In South Carolina in 1964, African-Americans have just been granted the right to vote, but the reality is that there are still lynchings and the people still need to fight to get to and from the ballot box. Young Lily Owens (Dakota Fanning) is a white girl who is walking her housekeeper Rosaleen (Jennifer Hudson) to vote. Her mother is dead and her father is abusive. When Rosaleen is attacked and put into hospital, Lily fears the worst for her. She breaks her out of hospital and they escape, managing to get to another town and finding a home with beekeeper and local businesswoman August Boatwright (Queen Latifah). There are good times and bad times, and the bad times are pretty darned awful.

It’s a very challenging film, and very good. Though, one of my favourite films (that I am scared to revisit in case it is not as wonderful as I remember) is The Colour Purple, and it is amazing. I guess what I really didn’t like in this film is that the Lily character is just awful; precocious, condescending and just awful. Yes, I still felt bad when bad things happened to her, but I just didn’t like her, and some of the decisions she made were clearly so stupid, yet she went and did them anyhow. Annoying.

Sam (Sean Penn) is a mentally retarded man living in New York who has fathered a small girl (Lucy). The mother has disappeared and he is left to raise the baby. Seems implausible, but the scripting is so strong that it is totally believable. It is also believable that when Lucy is seven, she is taken into custody and Sam must fight for her. And somehow, the overworking lawyer-who-ignores-her-own-son character of Rita (Michelle Pfeiffer) ends up taking his case.

This is another film that totally challenged my prior expectations. To be fair, I had this film recommended to me by someone who also recommended The Butterfly Effect, which I truly believe to be one of the worst films ever made. I am Sam is an excellent film that was nominated and won a whole heap of awards, and rightly so.