Watching The Bourne Identity recently reminded me of The Long Kiss Goodnight. I’ve watched this film so many times, and I will watch it often in the future because I think it is awesome. Not in some ironic way – honestly, I just love it to bits.

Geena Davis plays Samantha Caine, a housewife living in the suburbs. She has a husband and a child and a seemingly idyllic life, but she has no memories from before she arrived in this town as she was found wandering around. She’s happily married with a lovely small daughter. Then, she starts to remember. She was Charly, a hitman. Along with Mitch Henessey (Samuel L Jackson), a private detective she hired to find her past, she takes a journey to find who she is and free herself from the past.

And it is totally and utterly awesome. There needs to be more action films with women in the roles. I think I have a bit of a girl crush on Geena Davis, she is just so tough and awesome, but gorgeous and funny. I reckon I’ve watched this film twenty times and I could watch it another twenty. Or more. 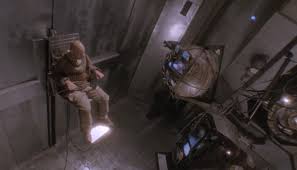 It’s 2035. Back in 1996, a massive proportion of the world’s population have been killed by a deadly virus and those remaining have retreated underground. Here, they send ‘volunteers’ to collect samples from the surface, but have also developed time travel technology and send people back in the past to gain information about The 12 Monkeys Army who they believe caused the disaster. When prisoner James Cole (Bruce Willis) is sent back, he ends up in a mental institution alongside Jeffrey Goines (Brad Pitt) and being treated by psychologist Kathryn Railly (Madeleine Stowe). Consequent visits change attitudes until there is more than one fight happening.

This is an extremely beautiful film. The future is horrible, the present not much better. (Or should it be the present is horrible and the past is not much better – it’s challenging talking about time travel). The story is typical Gilliam in that it is not typical of anything at all. Any time you think you know what is happening, things twist and turn and change. I saw this film several times back in the late nineties, but haven’t watched it for ages. Seeing it now gives me a different idea on the end, though I am still not sure on quite what happened.

12 Monkeys was nominated for Oscars for Best Actor in a Supporting Role (Brad Pitt) and Best Costume Design.

Bloody hell. This film is a dramatic torment from beginning to end. Following Sergeant JT Sanborn (Anthony Mackie) and Specialist Owen Eldridge (Brian Geraghty) as they deal with a new and seemingly reckless Sergeant First Class William James (Jeremy Renner). The three work in bomb disposal in Iraq, specialising in IEDs, and every event they go to is a tense situation with the potential to kill them.

The film is just so incredibly intense and wonderful. I’m not sure if it is an accurate representation of war, but it seems like it probably is. And it is awful and hot and dirty and repulsive. And wonderful.

A mysterious plague has suddenly hit the world, with little information being disseminated. People are turning into zombies, and not zombies like I’ve seen before. They are super fast – not just running, but zapping. The population of the world is rapidly disappearing, and the only way Gerry Lane (Brad Pitt) and his family are able to be evacuated is that he is an ex UN guy who specializes in war-torn areas, and the UN want him back. The film follows Lane as he travels the world attempting to discover anything that will help them survive.

If I’ve never made this clear, I am not a horror film lover. I don’t like being scared, I don’t generally chose these types of films. But I’d heard World War Z was an excellent book and had translated well to film. What’s more, it wasn’t totally gore-fest, but looked at the choices people made, more about characters and relationships. There is most definitely some gore-fest elements, but a lot of the time, the zombies are too fast to see an awful lot. What it leaves you with is an awful lot of suspense, and that almost killed me. It is just so tense and magnificent. The CG is definitely worth noting – especially my favourite part, which was the whole Jerusalem wall part. It’s on the trailer. It’s fantastic.

I’ve requested the book from my library now, because the idea of a zombie book fascinates me.

Jeez, that Stephen King can really write-up a storm, can’t he? He’s known for his horrors, like The Shining and It, but then you get the truly amazing, like Stand By Men, Shawshank Redemption and this, The Green Mile. These are his books and short stories; they make for great stories to be made into films.

The Green Mile is told as a flashback from a man in a nursing home, telling the story of his time as a guard on death row during the depression. In particular, of the time during which John Coffey, a large African-American man was brought in. Everyone was fearful of this giant, but there was a magic to the man, a magic that is gradually revealed to the guards.

I’ve recently been contemplating the old man/old woman flashback as a structure. Often, it doesn’t work. Halfway through The Green Mile, I wondered about this as a choice of structure, but it truly does pay off at the end. The film is slow-paced and long – over three hours long. But every minute counts.

The excellent plot is held together by strong performances;  Tom Hanks, David Morse and several others as the prison guards; the late Michael Clarke Duncan as John Coffey; James Cromwell as the Warden; and Graham Greene and Sam Rockwell as fellow prisoners.

I think this is a truly excellent film. Truly.

The Green Mile was nominated for Oscars for Best Actor in a Supporting Role (Michael Clarke Duncan), Pest Picture, Best Sound and Best Writing, Screenplay Based on Material Previously Produced or Published.

It’s always a risk, watching something that’s been screened on commercial free-to-air television. You don’t know if it has been edited for content or time, or just to fit more advertising in. I watched Disturbia assuming and hoping that I saw all of it.

Essentially, the film is a modern take on the concept of Rear Window, the Hitchcock classic. In this case, the protagonist is a teenager, Kale (Shia LaBeouf) who is put under house arrest after attacking a teacher who snidely refers to Kale’s recently deceased father. Wearing an electronic ankle bracelet, Kale must stay within a limited distance to his house, and becomes obsessed with his neighbours. Of particular interest is the teenage girl, Ashley (Sarah Roemer) who has just moved in next door and another relatively new neighbour, Mr Turner (David Morse) who they suspect is a serial killer. With kooky mate Ronnie (Aaron Yoo), the three get into all kind of trouble.

I should not watch suspense or horror films. Ever. I just shouldn’t. Even this film (which is not very good despite having the marvelous David Morse at his chilling best) made me extremely tense. It’s not well written, and the concept is preposterous. Yet, I kind of liked it; it was a little scary without stopping me from sleeping.