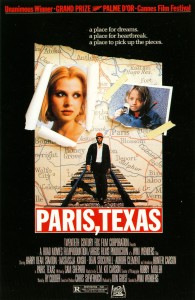 After Travis (Harry Dean Stanton) appears in a bar in the middle of the desert after a long disappearance, his brother Walt (Dean Stockwell) takes him home. Walt has been raising Travis’s son, and Travis wants to make things right.

This is a beautiful, strange, terrible film. Awful characters who make no sense, who make shitty decisions and yet there is a real heart to it. I liked it, but I never want to see another film like this again. A slow film telling the story of a man with regrets who needs to destroy the lives of others to fix his mistakes. (I am also very aware that others would read this very differently).