The third part in The Godfather Trilogy, this film sees an aging Michael Corleone (Al Pacino) still trying to take his business straight. How? By going into business with the Vatican. Because that makes sense.

I’ve heard it said that many consider this to be the weakest of the films, yet I think it is still considered to be a good film. I dunno… I found that in the previous films, I quite liked Michael and hoped that he would come good. In this film, I felt he was too far gone – he was just so over the top, quite a caricature of who he’d been previously. And the whole Vatican story I found… quite stupid, really. I just couldn’t care less. Perhaps it was just too much Godfather in one weekend.

You know when you leave it too long to watch a classic movie and it means you just don’t quite get what it was all about? I knew I’d watched The Godfather years ago, but I couldn’t remember a lot of it. Which perhaps in itself suggests that this is not the film for me.

If you don’t know (as if you don’t know) Marlon Brando is the Godfather. The head of the mafia family, the Corleones. The film follows him and his family after there is an attempt on his life. Plans are laid and families are against each other. It’s violent and dark.

I understand why it has such a great wrap, but I just didn’t really like it all that much. You know why, I think? I think it is because I am used to long form storytelling, and (despite it being almost three hours worth of film) there just isn’t enough time to tell such an epic story. I am well aware that if it were not for The Godfather, we wouldn’t have The Sopranos. Still, I thank The Godfather for starting it all.

When their college friend Cynthia (Stockard Channing) commits suicide after her husband remarries a much younger woman, friends Elise (Goldie Hawn), Brenda (Bette Midler) and Annie (Dianne Keaton) realise they have all been thrown over by their husbands in the same fashion. Instead of risking bottoming out, they support each other in seeking creative revenge.

One of the characters mentions that what they are doing is just what people expect – and it is ugly and makes them seem very ugly. And there is an aspect of that – but what it seems to be more about is three women who had become defined by their marriages, none of which were that healthy, who stand up and take charge of their lives. They are not prepared to just let their ex-husbands treat them like crap but it become about more than simple revenge. Oh, and did I mention that it is a really funny film with some great female characters? Well, it is.

The First Wives Club was nominated for an Oscar for Best Music, Original Musical or Comedy Score.

Milly (Mandy Moore) is unlucky in love, unlike her two sisters, Maggie (Lauren Graham) and Mae (Piper Perabo). Luckily, she has the most annoying mother in the world, Daphne (Diane Keaton) to meddle for her. Daphne sets up an internet profile for a mother seeking a mate for her daughter, and a montage ensues. Of course, the only suitable candidate after a line of ridiculously unsuitable ones, is a handsome, rich architect; Jason (Tom Everett Scott). But there is a musician, Johnny (Gabriel Macht) in the bar where Daphne meets the candidates, and he finds it quite amusing. He sets himself up to meet Milly; Daphne sets Milly up to meet Jason. And things get complicated.

Why, Dianne Keaton, why? You are such a wonderful actor with so many top roles to your name. Did they give you a lot of money? I really hope so, or perhaps they had some incriminating photos or something. I hate to think that you read the script and thought the film was worth making. It was appalling. Cringeworthy. Terrible. In so many ways terrible. I usually only shout at the television when politicians are on; but I screamed at this. So very, very bad. I regret not turning it off; the only good thing was seeing Gabriel Macht wearing the most stupid clothes and acting very much differently to his character in Suits. That made me laugh. The rest? Blech. 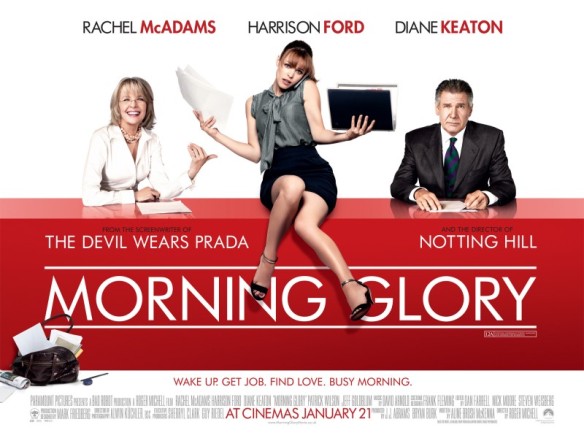 This film is an unexpected delight. It looks awful – a romantic comedy set in the world of morning television with a young, bright-eyed producer Becky Fuller (Rachel McAdams) attempting to get grumpy newscaster Mike Pomeroy (Harrison Ford) to be a cheerful breakfast hot alongside bitter and resentful Colleen Peck (Diane Keaton). There are a few fairly awful moments in it, but generally, I really enjoyed it. It was fast-paced, funny, stupid but also annoyingly heartwarming. A really good and fun lightweight comedy.