It’s 1949, Japan. It’s an alternative world where World War 2 never happened, and aristocrats rule. There is a criminal, K-20, a man who is plaguing society. After acrobat Endo (Takeshi Kaneshiro) is framed by the real K-20, he sets about to capture the real criminal and prove his own innocence. And fall in love with an aristocrat’s daughter, teach her about the poor and change the world. Not too tall an order…

So much fun. Great action, but combined with fabulous slapstick and an excellent script. It leads you one way, it takes you another… just watch it. It’s so worth it.

Based on real events, the film tells of a famous member of the anti-Nazi resistance movement, The White Rose. Sophie (Julia Jentsch) and her brother Hans (Fabian Hinirhcs) were arrested after a flyering campaign at their university. They were then interrogated and, ultimately, sentenced to death.

This is a different side to the war that we rarely see. Usually, we see the horrors of the death camps, or the atrocities of the Nazis, or the bravery of the allied soldiers. Rarely do we see the other people in Germany. The ones who were incredibly brave in trying to find ways to stand up against the oppression, even if, at the time, it seemed to have little effect.

Sophie Scholl: The Final Days was nominated for an Oscar for Best Foreign Language Film of the Year.

A young boy being bullied at school makes friends with a new girl that he sees only at night in the courtyard of his apartment block. Eventually he learns that she is a vampire, but she is his only friend and he needs to reconcile his fear of what she does with this new relationship.

This is the film that Let Me In was based on, and the two films are extremely similar. The US remake captured beautifully the pace and emotion of this film, with on a few changes. It is very beautiful, but so is the remake. Often, I would say don’t bother watching the remake, stick to the original, but in this case, they are very much interchangeable. Watch either or both, but brace yourself for some suspense and watch one. 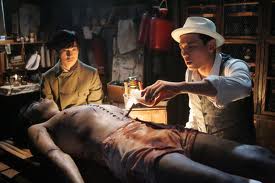 Ridiculous, hilarious, marvelous, wonderful. I love South Korean films, even when they are somewhat stupid like this one, veering from outright slapstick to hideous, horrible violence.

It’s the early 20th century in occupied Korea. So, there’s an ex-army dude who is now a private eye, mostly going after cheating wives/husbands and the like. He has fancy gadgets (yeah, a bit like Bond) given to him by a rich a beautiful woman who love science. Then there is a medical student who finds a dead body and takes it home to practice his anatomy work (as you would) only to discover that the body is that of a prominent man’s son. He hires the private eye to help him discover who killed the guy. More people die, there’s a circus, and lots of serious faces followed by crazy dancing. Love it.

Teenager Aicha (Semra Turan) is expected by her Turkish Muslim parents to follow her brother into medical school and become a doctor. This isn’t what she wants, though. She loves kung fu, and trains in secret in a mixed club where she finds a strong attraction to her training buddy, Emil (Cyron Melville).  But when her secret gets out, it breaks off the engagement between her brother and his fiancé.

It’s not a new story; girl from one background (in this case, Turkish) is in a different place (Denmark) and wants to do something unfeminine (kung fu). But her behaviour is made to be responsible for the lives of others (in this case, her brother’s engagement) and she is left feeling guilty and forced to go against her parents to be true to herself. It’s not a bad story, although totally annoying. Why should her sport affect her brother’s life at all? It shouldn’t. Does this bring anything new to this genre? Yes. Style. The story is average, but the look of the film is beautiful, especially the fight sequences.

Renee (Josiane Balasko) is a middle-aged, plain woman who has spent most of her life working as a concierge in a Paris building, keeping her interests and intelligence hidden from those around her. In the house is a young girl, Paloma (Garance Le Guillermic) who is creative and interesting and loves to hide. Then Kakuro Ozu (Togo Igawa) moves in; a Japanese man who is fascinated with both Renee and Paloma and changes their lives.

The film is based on the book by Murial Barbery, a book I’d like to read again. I recall that I disliked the book first time around, but after receiving several recommendations, I gave it a second read and really enjoyed it. I felt as though the film captured the essence of the characters, specifically Renee, but I think that I liked the film more because I liked the book. It’s one of these films that I walk away from very aware that my attitude is affected by my experience, and I find it hard to be objective. Regardless, I liked it.

It is present day South Africa. Tsotsi (Presley Chweneyagae) lives in the slums of Johannesburg, hanging out with a gang and committing petty crimes to stay alive. Thanks to the psychotic Butcher (Zenzo Ngqobe), a simple robbery goes wrong and Tsotsi strikes out on his own. However, when he takes a car, he gets more than he bargained for – a small baby is in the back seat. Panicking, Tsotsi takes the child to raise as his own. But despite the assistance of Miriam(Terry Pheto), a young mother in the area, things spiral out of control for him.

Hinting on sadtacular, Tsotsi is an extremely beautifully shot film. Even the most grim-looking subways and shacks in the slums have hints of bright colour and life. Something about this gives a sense of hope, despite the desperation of the storyline. Chweneyagae is wonderful as Tsotsi, with long shots of his almost expressionless face giving conveying so much. It’s not an easy film to watch, but the story shows a party of the world that is rarely represented to the rest of the world.

Tsotsi won an Oscar for Best Foreign Language Film of the Year.