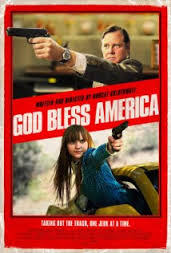 Frank lives in a house next door to an obnoxious couple and their constantly wailing baby, works with people who he can’t stand and has a daughter being raised as an obnoxious brat by his ex-wife and her picture perfect husband. What’s more, he suffers from bad headaches and insomnia, and spends much of his waking hours at night watching the appalling series of reality television shows that apparently represent the cesspool American society has become. Is it any wonder that he is eventually pushed over the edge and takes his gun to the street? Reluctantly, he allows teenager Roxy to join him as they take out the worst offenders.

It was fabulous. I can’t say that I’ve ever actually wanted to pull a gun out at the mean people I see on television, but I’ve certainly wanted to tell them to stop. I certainly don’t agree with all of the categories of people that Frank and Roxy listed as deserving to die, but I can understand why they made it on the list.

Director Bobcat Goldthwaite is still best know by most people for his role in the Police Academy films back in the 80s, but he has been making films with his wonderful black humour for some time. As a guest of the festival, Goldthwaite took questions from the audience, and to the audience credit, most of the questions were intelligent and allowed for strong and considered answers.