There is an old story of a group of blind men who have heard of a creature called an elephant and are taken to meet it. Each feels a different part of it and uses what he feels to say what the animal is; while each is correct, none are correct unless they are all together. In the film Elephant , Gus Van Sant follows several groups of students on what seems to be an ordinary day. We have some flashbacks of some of the students, and there is a lot of quite delightful overlapping. And at some point, a couple of the kids bring out guns and start shooting.

It’s a horrific film when you know what is going to happen. You are constantly watching, waiting. Wondering who it is that is going to snap, who will live and who will die. It’s an extremely good film, and (unfortunately for so many people in the US) an extremely relevant film. 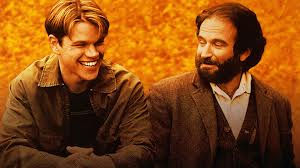 Will (Matt Damon) works as a janitor at MIT and is secretly a genius, but he prefers to spend his time with his mates. After solving a maths puzzle set by Professor Gerald Lambeau (Stellen Skarsgard), he is discovered, but his behavioural and emotional problems need to be dealt with. Eventually, he finds a fit with Sean Maguire (Robin Williams) who is dealing with his own problems. And chuck in gorgeous British beauty Skylar (Minnie Driver).

This film may always be known as the film that rocketed unknown actors Matt Damon and Ben Affleck into the spotlight as (or so the legend goes) fed up with not getting work, they wrote an awesome script and here it is. I don’t know if that is true as such, but I will say that after watching several of the Ben Affleck directed films, Good Willing Hunting gives us an indication of his talent. He knows how to craft a good, emotionally engaging story with flawed characters trying to beat the odds. It’s a good film. Real good.