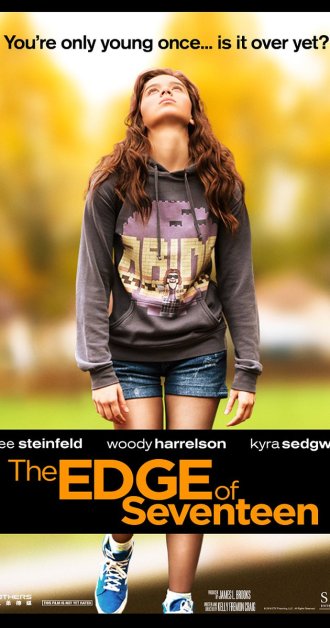 Nadine (Hailee Steinfeld) is a teenager who has never felt she fits in. Her father has died, her mother (Kyra Sedgwick) is erratic in a similar manner to Nadine, her brother, Darian (Blake Jenner) is a super cool footballer who seems to get whatever he wants, especially popularity. Luckily she has her best mate, Krista (Haley Lu Richardson) to get through life with… until Krista and Darian start dating, and then Nadine’s life starts to fall apart. Will her grumpy teacher Mr Bruner (Woody Harrelson) be enough to get her through?

There’s a lot to like about this film – the cast firstly, especially Hailee Steinfeld who carries the film well. She’s got that wonderful self-centredness common to teenagers, so that the whole world is against her and she cannot see beyond her own problems. Which is also what totally annoyed me about the film – I just wanted to shake Nadine and her mum and say stop it! Look around – things aren’t great, but you’re still quite wealthy white folks in the US, you’ve got the world at your feet and the things that you are unhappy about actually can be changed! Oh and don’t get me started about the way she treats Edwin (Hayden Szeto), a quite hot geek who gets tongue-tied around her and she knows it and yet she treats him like… that. Annoying.

Hailee Steinfeld was nominated for a Golden Globe for Best Performance by an Actress in a Motion Picture – Musical or Comedy.