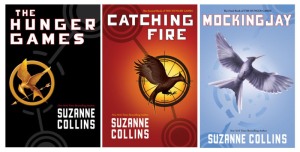 Wow, young adult fiction has certainly changed since I was a kid. In my day, it was all Judy Blume, reality and problems. Bullying, self-doubt, periods. There was way less killing and stuff.

The Hunger Games is fabulous – still dealing with some of these issues, but with the constant threat of oppression and death hanging about.

For those that don’t know, the Hunger Games trilogy is set in a world, Panem that consists of twelve districts controlled by The Capitol. After an uprising 74 years previously in which district thirteen was annihilated, each of the districts must take part in The Hunger Games. Two teenage competitors from each district are sent into an arena which and must fight to the death. Only one can survive. It is cruel, hard and awful, but that’s entertainment. Katniss Everdeen and Peeta Mellark represent district twelve, and form an alliance that sees them both survive – but at what cost?

The second novel, Catching Fire, has Katniss trying to deal with the world she is now part of – Peeta wants nothing to do with her, she has lost the little freedom she had prior to the games, and revolution is beginning to spread through Panem, although communication is controlled by the Capitol. Katniss and Peeta are again forced into the arena, but they are unaware of how different the situation is.

The final novel, Mockingjay, has Katniss working with the rebels to fight against the Capitol. It is dark and awful and amazing.

These books are fantastic. They cover a wide range of issues, from oppression and starvation to betrayal and choices. There is a lot, A LOT of death, and very gruesome death, as well as torture and beating. The last book in particular gets very, very full on, and there were parts that I had to read several times to be sure that I had really read what Suzanne Collins had written.

The first book has been made into a film that I thoroughly enjoyed; it was excellently cast and took the most important parts of the book. The second film is due for release in November 2013 and I cannot wait. No, I won’t go to a midnight screening with a whole heap of young fans, but I reckon I’ll get to it in the first week or two.