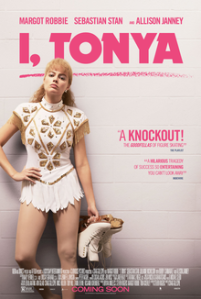 In 1994, ice skater Nancy Kerrigan was attacked and injured, and it quickly emerged that Tonya Harding and her husband, Jeff Gillooly, were involved. This film tells the story from the fictional perspectives of Tonya (Margot Robbie) and Jeff (Sebastian Stan), with both relatively innocent, or unknowing, or fooled by Jeff’s mate, Shawn (Paul Walter Hauser). It’s a film with ambition, struggle against class and violence in many different ways. And it’s not real.

I enjoyed the film – the performances, the style, the fashion. And what a great true story – only this wasn’t the true story. I don’t think I’ve read as many articles about a film as I did after watching this. The more I read, the more issue I took with the film. I walked out feeling anger at the world which has some people starting so far behind others due to money, or location, or crappy family, or whatever. And then I found that several key scenes in the film, scenes that manipulated my feelings to have some empathy for Tonya and her situation, were totally made up.

Thinking back, I believe the film was pretty open about being a representation of the accounts of Tonya and Jeff, accounts which were inaccurate and, at times, plain lies. Why do I feel so grumpy that I was led astray even as I was told this was happening? I don’t know. I think it is a good film, so long as you don’t actually believe it.