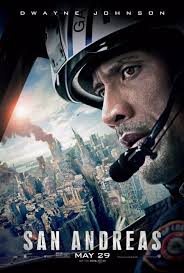 There is an insane earthquake in Calfornia. It’s massive and destroys lots of stuff. Meanwhile, Ray (Dwayne Johnson), a rescue pilot, goes out of his way to save his ex-wife Emma (Carla Gugino) and daughter Blake (Alexandra Daddario). His daughter, abandoned by her soon-to-be step-father Daniel (Ioan Gruffudd) works with Ben (Hugo Johnstone-Burt), an English man and his little brother Ollie (Art Parkinson). And, spoiler alert, while thousands of people die, these guys all get through.

I had a few basic issues with the film – why was Ray able to abscond with a helicopter to safe a couple of specific people rather than any of the thousands that are waiting around to be rescued. Also, poor old Daniel (oh, spoiler alert, he doesn’t make it) is painted as a wuss and loser, when in fact, he has sustained a head injury and is clearly in shock – but he is not The Rock, so he is a wuss. But let’s put those aside – this is a good old classic disaster film. Big action, crazy scenes and miraculous survival. Oh, and we get a couple of Aussies in there for fun – kudos to Hugo Johnstone-Burt who I always loved in the local Phyrne Fisher Mysteries, and yay for a quick Kylie Minogue spotting. Ace times.

A group of scientists who visit a space station are hit by a mysterious radioactive wave and develop powers, and then have to deal with the consequences.

It’s the origin story of the comic strip Fantastic Four and I thought it was pretty ace. I especially like that, before they really get a chance to figure out what kind of ‘powers’ they have, they end up in a situation in a very public place, and have the eyes of the world on them. What was most poorly presented (and this may well be a reflection of that in the comic book) was the reaction of Ben Grimm’s fiance after he becomes The Thing. He is a giant made out of rock, but is still himself personality wise. She just runs, screaming, from him, and is portrayed as the bad guy. I think that that reaction in the face of such  a strange transformation is pretty reasonable, and that it could have been explored in further detail. But, it is a comic book film, after all; perhaps character depth is asking too much?

I found it really odd seeing Chris Evans as the arrogant idiot Johnny Storm after being the troubled, quiet Captain America in other Marvel films. I thought this would rule out the Fantastic Four hooking up with the Avengers at some point, but it looks like there is a new Fantastic Four film coming out next year, so I guess we’ll see. A little bit of research shows that the 2007 film, Fantastic 4: Rise of the Silver Surfer has the same cast as this film, but the 2015 film is a new cast, and there is already a second Fantastic Four film scheduled for 2017. Looks like the Fantastic Four are being reinvented much as the Incredible Hulk was.