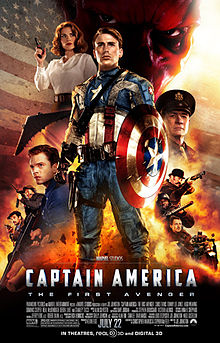 I think this is it. I think finally I have managed to see all of the released Marvel films; well, this bunch, the bunch leading in to The Avengers. According to Wikipedia, this lot comes under MVL Productions LLC or Marvel Cinematic Universe.

In The Avengers, Captain America was my least favourite character. He had so much make-up on that it looked ridiculous, and I didn’t know his origins. I had little time for him. But, this crazy mission of mine to see them all led to watching this film, and I am so glad it did! Captain America is awesome.

The majority of the story is set in 1942. America is joining the fight in Europe against the Nazis and Steve Rogers (Chris Evans), is attempting to be a part of it. However, he is a small man who suffers from a wide range of illnesses and is rejected again and again. Finally, he is spotted by Dr Abraham Erskine (Stanley Tucci), a German scientist who has moved to the US and works for the US army. He tests his new technology on Steve Rogers, developing his muscles and motor skills to turn him into a super soldier, Captain America. The program is infiltrated by HYDRA, the organization headed by Nazi Officer Johann Schmidt (Hugo Weaving) who has obtained a Tesseract providing him with powerful weapons and the ability to conquer the world. Captain America must save the day.

Perhaps it is from a childhood of Indiana Jones, but I love a good action film where the Nazis are the bad guys. I think I liked this even more because it was not just the Nazis, but this super group of Nazis. Again, there is an amazing cast and awesome effects, and it leads directly into The Avengers. There is another Captain America due out in 2014. I can’t wait.