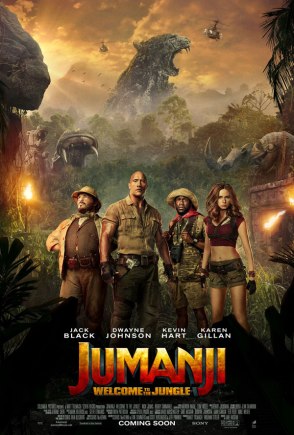 A sequel to the 1995 film Jumanji, we find ourselves in a world where the powers of the board game Jumanji have transferred to an Atari-style computer game. On a detention where four students are left alone to remove staples from magazines (and my disbelief starts here – in such a litigious society as the US, would students be left unsupervised?) they come across the game, get sucked in to a jungle game world and put into the bodies of avatars where they have to complete the game or never return home.

So much potential. I was prepared to deal with the possible problems of having Jack Black play a teenage girl (though his depiction was generally not nasty and mostly quite funny), and was totally ready for stupid humour. But there were barely any females at all. I had a friend point out that many of the problems of the film could come back to the film attempting to make a statement about the misogynistic nature of gaming, and I’d be prepared to accept that having the ‘geeky’ girl appear as a skimpily-dressed avatar (played by Karen Gillan) may be seen as a comment on this. However, the audience of this film is teenagers (and perhaps folks a bit older), and less likely to read the film in a theoretical, critical way. There were plenty of chances to have some fun female characters in this, much as I loved see Rhys Darby and Bobby Carnavale in their roles, either of these could have been kick arse women. Or the extras – the guy selling the bread in the market, or the little boy they follow in the market, or any of the hundreds of bad guys on bikes, or even the dude trapped in the game for twenty years. In fact, the only women in the extras were a couple of mothers, a teacher, a friend and an assistant principal – and they were all in the ‘real’ world, were very little of the film is set. And only a couple of them get to say more than a handful of words.

So, to the world of the game. There is one female in this world. (I’ve checked on IMDB and I think I’m right here, but I’m happy to be corrected. Some may argue that Jack Black is playing a female character, but that still leaves us with a lack of female actors in this world).   Having the singular female here wearing skimpy clothes and being told that her only worth is flirting? That’s lazy and irresponsible. Yes, she made up for it by fighting them, but why, with martial arts skills, did she have to use “dance fighting”?

In a film like this, the main characters are supposed to grow. But I felt like there was very little growth – the characters could have had meaningful lessons, even really cheesy, Hollywood meaningful lessons. Instead, it was superficial. The many moments of humour and even my huge crush on Dwayne Johnson, could not get me past the woman-hating nature of the film. I’ve put the original Jumanji on my ‘to-watch’ list, because I feel like I need something to refresh my palette, and perhaps reduce my anger. Though I’m fearful that it may not be as good as I recall.