It will be the film always known as the one that brought Brad and Angelina together… or the film that split Brad and Jennifer up. It’s not that much of a shame, because it’s not a brilliant a film.

The premise? Brad Pitt and Angelina Jolie play a husband and wife who are both assassins, though neither suspect the other. Then they both go out on the same kill and ruin the job for each other, and not long after that, they are both trying to kill each other.

What worked? The couple in therapy, bored with each other, then becoming attracted again once blood lust was in the air. The running and shooting and explosions were very good. The concept was pretty ace, and there was some awesome technology. It was fun, and I do like my action with some comedy, so tick and tick.

Ray Charles was a huge success over many, many years in the music industry. He overcame poverty, blindness, racism and many years of drug addiction to gain and maintain his success. The film Ray covers his early years through to his time in rehab.

The film is structured with a variety of flashbacks and dreams where Ray is given advice from his mother on how to life a good and true life. At times, I found the flashbacks to be clunky and quite intrusive on the story. There is so much in the story, it could have easily just run chronologically  and been equally as engaging. Some filmmakers seem to think that they need to have twists or disjointed time to get the story across. Sometimes, they do, but sometimes it is really not needed. The life of Charles is quite interesting and inspirational, although I felt that the film ended just as we saw him overcoming his drug problems and I would have liked to see more of this. Than again, it was a very long film and so it probably just needed to end. 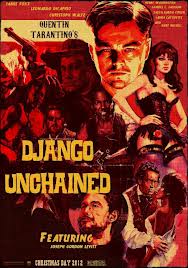 The return of Quentin Tarantino. Good. I’ve always been a fan, despite having reached an age and sensitivity where I need to close my eyes during the most violent scenes and some of the hilarious dialogue makes me cringe. Thank goodness there’s a lot more to it.

Django Unchained sees Christopher Waltz (who played the massively evil Nazi in Inglourious Basterds) playing Dr King Schultz, a bounty hunter who travels America killing criminals for the reward. He finds himself hunting three brothers who he can not identify, and requires the services of Django, a slave in chains being marched across the country. Django previously worked on a plantation where these brothers were overseers, and Schultz enlists him to assist him to recognise that dispatch them. Eventually, the two men pair up to find Djano’s wife and return her to his arms. Things get bloody in the way that only Tarantino can manage.

I did enjoy this film, although I found that there were several times when it really seemed too long and I needed a break. However, the performances were so strong that I was caught up in the paths of the characters. Yes, at times they seem a bit too smart for their own good, but they have to be. And yes, those who are evil are totally and unquestionably evil. But that makes revenge so much more sweet.

I think Django Unchained is the type of film you need to enjoy for what it is – ultra violent, quite funny, very clever and with an awesome soundtrack. Like much of Tarantino’s work.

Robert Richardson has been nominated for an Oscar for Best Cinematography

Django Unchained has been nominated for an Oscar for Best Picture

Christopher Waltz won the Golden Globe for Best Performance by an Actor in a Supporting Role in a Motion Picture and was nominated for a BAFTA for Supporting Actor.

Fred Raskin has been nominated for a BAFTA for Editing