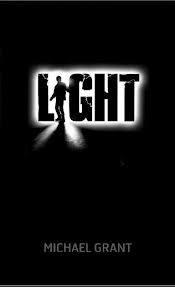 It’s over! This series of books is over! Hallelujah! Being the type of person who really hates starting something and not finishing it – whether it is a book, a series of books, movies or whatever, coming to the end of a series of six books is very satisfying. It is very hard for a series to maintain momentum for six books. For me, I think three or four in this series would have been enough. What was extremely effective and kept it going was having a different theme for each book, and the theme being the title.
In the previous novel, Fear, the outside world set off a nuclear explosion in the hope of releasing those inside (or getting rid of what they referred to as the anomaly). The effect it had was to render the barrier invisible, and suddenly not only is it lighter inside with the natural sunlight (Light. Get it?) but the kids inside can see those outside and vice versa. They’ve wanted this for so long, but when the adults see the reality of inside, with young children drunk, smoking, carrying weapons and in various states of malnutrition, the adults start to fear what will happen in they are released. Work grinds to a halt inside as children spend all their time trying to communicate with the outside world. On top on this, the gaiaphage has taken over Diana’s baby with dire consequences. The final battle must commence.
Knowing it was the final book, and with every indication within the book that it must be coming to the end, there was a sense of urgency. Yet Grant did not rush it which left me very concerned that it would not actually end at all. Luckily, it did, and I was very glad to leave this world and these characters behind. It became extremely violent and gruesome by the end, with truly awful things happening. This reminded me of the Hunger Games series, in particular the final book, Mockingjay. Perhaps it is the fact that it clearly is not the real world; there are mutations and creatures, and so there is a lot less ‘real’ violence. Still, some of it was pretty tough going. These characters and books will stay with me for a long time.