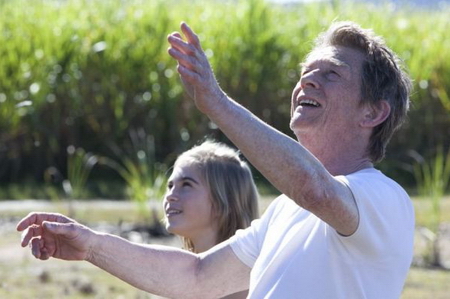 Lou is the oldest of three sisters living in rural Australia. Her mother is trying to make a life for them now that their father has left and she places a lot of responsibility on Lou while she works (and sometimes as she parties a bit). Then, her father-in-law is brought to the house to stay. He is suffering from Alzheimer’s and there are no current places in nursing homes for him. He starts to believe that Lou is his wife and he is a young man courting her, but not in a creepy way.

Lily Bell Tindley playing Lou is fabulous. And John Hurt is wonderful as the elderly man. But I could not get past several key parts of this. Why would this woman take in the father of the man who abandoned her? This was not explained to my satisfaction. Also, why would the nurse/social worker allow him to be taken to an extremely isolated property without any medical care? Why would the mother then leave her young daughters to take care of this strange man?

It is a beautiful film, but it is pretty hard to avoid beauty when filming the Australian outback. I wanted to like this – I always want to like Australian films,

but with so many flaws in the writing, it just annoyed me.