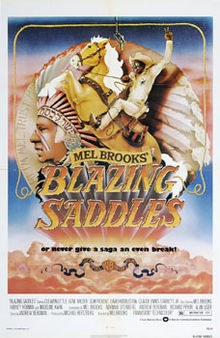 It’s the wild west, and  Hedley Lamarr (Harvey Korman) is a corrupt businessman who wants to build on his fortune by acquiring the land through which the new train line is going to run. The problem? The town is fully populated, and he needs to lose them. His solution is to replace the deceased sheriff with Bart(Cleavon Little) to be the first black sheriff in the US. The plan is that the town will be so outraged at this that they will leave. Only, Bart starts to outwit those who threaten the town, and they need to swallow their racism and learn to accept him. There is also Jim(Gene Wilder) a drunk whose only real purpose in the film appears to be as a sounding board for Bart. But it’s always delightful to watch Gene Wilder, especially when he’s playing the only non-racist character.

If you love Mel Brooks and his wacky sense of humour, you’ll love Blazing Saddles. Mind you, if you love Mel Brooks, you’ll probably have seen this a million times. Should you have not experienced Brooks, start with this one. Or The Producers. What is the humour? Crazy. Boobs out. Challenging stereotypes whilst still catering to the lowest common denominator. It’s funny that – for all the times a character calls the sheriff a n-word (nope, not prepared to write that down in this day and age), it is very much an anti-racism film. And then it does the marvellous thing at the end of playing with the medium, with the characters ending up on a present-day (well, 1974) studio lot and watching themselves on-screen in a movie cinema. It’s great to see the film challenging the racism of society, but it certainly doesn’t challenge sexist stereotypes. The only women in the film are either grumpy witches or sexpots. Guess we can’t ask for it all?