Following from the success of The Trip (2010), Trip to Italy sees Steve Coogan and Rob Brydon paired up again for the Spectator, this time reviewing food and accommodation around Italy. The dynamic has changed between them, with Steve now seeming more settled and Rob more stir crazy, but there is still plenty of playing off each other, especially with impersonations.

I’ve only seen the film version of this, and don’t feel I need to race out to grab the series. I expect I will, they are very funny blokes. And the food. Oh, the food. Wow. Oh, and the views, and the hotels, and the places that I doubt I will ever be able to afford to stay in. Really wonderful.

Steve Coogan has been given a gig travelling the lake districts of England, staying in delightful hotels and eating marvellous food, and all he needs to do is write it up for the Observer. His young American girlfriend can’t make it, and so he invites his mate, fellow comedian Rob Brydon. The two of them have a gentle rivalry and spend much time trying to out-impersonate each other.

There is a lot for a viewer to enjoy about this film. I’m a huge fan of the humour of these guys together, especially when crafted into a cohesive story balancing the laughter with scenes of melancholy. Then there is the scenery, the beautiful places they stay and, of course, the food. Oh, the food.

The Trip can be watched as a six-part television series or has been cut down for a feature film. 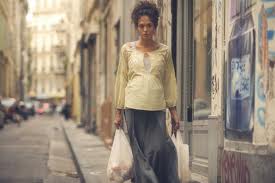 Based on a true story, A Mighty Heart follows Mariane Pearl (Angelina Jolie) as she deals with her journalist husband’s disappearance in Pakistan.

This should have been heartbreaking. It should have had me in tears, and feeling every injustice in the world. Instead, I was kind of bored. I had no interest in what had happened to this man or what was going to happen to his heavily pregnant wife. I’ve been struggling to figure out why; perhaps I just couldn’t believe Jolie in this role. She’s fabulous when she runs and jumps and fights and shoots guns, but waiting and keeping her emotions together? It just didn’t work. Perhaps it was the structure of the film, with seemingly misplaced flashbacks throughout that burst any bubble of tension that may have been building. It’s based on a book. Perhaps the book is better.