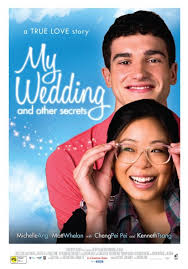 This film is a total and absolute delight from start to finish. Remember those big, quirky Australian comedies of the early nineties? Muriel’s Wedding, Strictly Ballroom and the like? Did you ever wonder what they could have been like if they weren’t filled with over-the-top caricatures and damned quirkiness? My guess is that, if they’d been done well, they could have been almost as good as this film.

My Wedding and Other Secrets tells the love story of Emily and James. Emily is a film student who has been raised in a traditional Chinese family who will not accept a non-Chinese boyfriend. Whilst fencing at her university, she meets James, a delightful, Dungeons and Dragons playing geek and they very quickly fall for each other. The film is a romantic comedy, so most of the turns it takes are not huge surprises to the audience. It is the way that the film touches your heart with believable characters and honest reactions that makes this a great film.

At times, I was a bit frustrated with the depiction of the geek girl. Emily wears big glasses, is a bit clumsy and has some pretty quirky facial expressions. Despite this, Michelle Ang gives us a character that we like and believe.

What could be a more perfect film for Melbourne Geek readers – a romantic love story between two geeks?