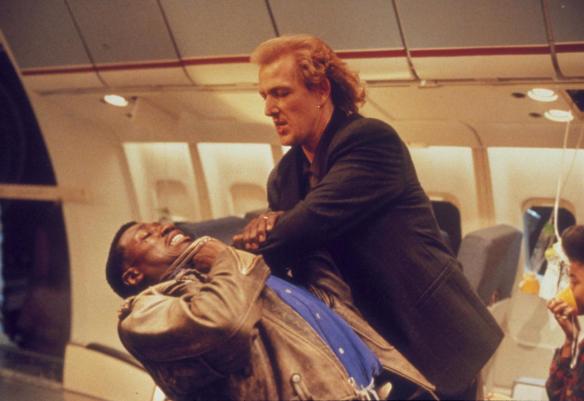 Ah, remember the late eighties and early nineties with their kinda bad but also totally awesome action films? No, not Die Hard, that’s a good one. Things like this and Con Air, and Demolition Man. Broken Arrow. Face Off. Oh, too many, too wonderful, too terrible. Wesley Snipes is passenger 57 – John Cutter, a security expert with a recent tragic past (something happened to his wife) who is on a plane that is hijacked by the evil Charles Rane (Bruce Payne) a bad guy with a most flowing mullet and curious introduction (he is about to have his face replaced medically, but instead kills the surgeon and jumps out a window. Or perhaps just runs out the front door. Details are not important, people). But to get through and save everyone possible, he must learn to trust again, as well as dealing with Deep South bigotry (and, with great humour, just forgive the racists who treat him like crap).

It’s not a great film, it’s not even a good film, but for a bunch of people, probably all of my vintage, it’s one of our favourite films. And, like many of the films mentioned above, it has some great lines. Why on earth, in the middle of a conversation with the hijackers would you bring up gambling? Oh, only to get in the wonderful line: “Always bet on black.” Genius.