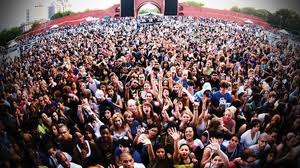 The McCarren pool was built in Williamsburg, Brooklyn in 1936 and was large enough to accommodate nearly seven thousand swimmers. Over the years, the social and cultural landscape of Williamsburg changed until eventually the pool was closed in 1983. In 2005, it was redeveloped, initially for a site-specific dance performance but was then used for the highly successful ‘Pool Parties’ providing free daytime concerts with many of the best bands of New York and beyond.

The documentary gives a glimpse of the cultural transition of Williamsburg from Eastern Europeans, through Hispanic and African-American residents and now passing through the hipsters to full gentrification. This is potentially a politically and racially charged topic, but the weight of this topic is balanced by the lightness of the music documentary.

I came away from this film fascinated with the history of the area and jealous of those who were there for the concerts. The Pool Parties have left the McCarren pool and it is in the process of being refurbished back to its original use. In 2012, it will reopen as a pool two-thirds of the size of the original pool (and no doubt with less of the synchronized swimming) and with an ice skating rink. I wish I’d known about it. I wish I’d gone. At least this documentary gave me a glimpse of the experience.