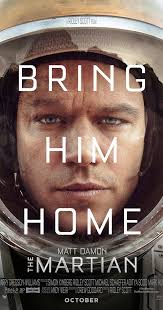 On Mars, things can be unpredictable. Like, you may just be doing some routine things, collecting rocks or whatever and then a big storm can hit and you have to get out. But what happens when one of you gets left behind? Well, if you happen to be Mark Watney (Matt Damon), you are a lucky guy. You’ve got a whole lot of brains, and you can do stuff to keep yourself alive in the hope that your awesome crew and the folks back on Earth can figure out that you are still alive and try to work out how to get you back

Apparently a lot of the science is based on real science, but really, I don’t care. It was a good, fun film. Matt Damon gets to play a character who has a lot more personality than I’d expected. The supporting cast are pretty terrific, just check out these names: Jessica Chastain, Kristen Wiig, Jeff Daniels, Sean Bean, Kate Mara, Chiwetel Ejiofor and it goes on and on. I loved the suspense, the fear, the making things work -it was like a whole new and exciting Apollo 13. 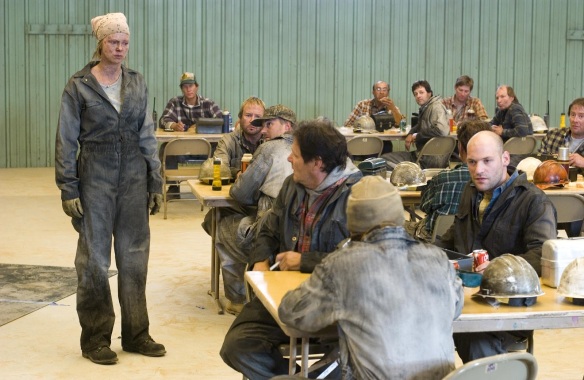 After leaving her abusive partner, Josey Aimes (Charlize Theron) takes advice from her friend Glory (Frances McDormand) and gets work in the mine. But she finds that the small group of woman who work there are putting up with appalling sexual harassment, from simple comments through to violent acts. Eventually, she can take no more and must try to stand up for herself, but faces the violent anger of the men of the mine who are annoyed and angered by the presence of women in the workplace.

It’s based on a true story, and it is surely impossible to watch this film without becoming angry. So much of the harassment that takes place in the workplace during the film could be seen as just jokes that the women should just laugh off – and indeed, much of the time they do. But it is horrible to watch just how nasty and abusive the men get – and that they feel totally entitled to act like this against the women and have full support of management, right to the top. It’s a heartbreaker of a film with fabulous cast. 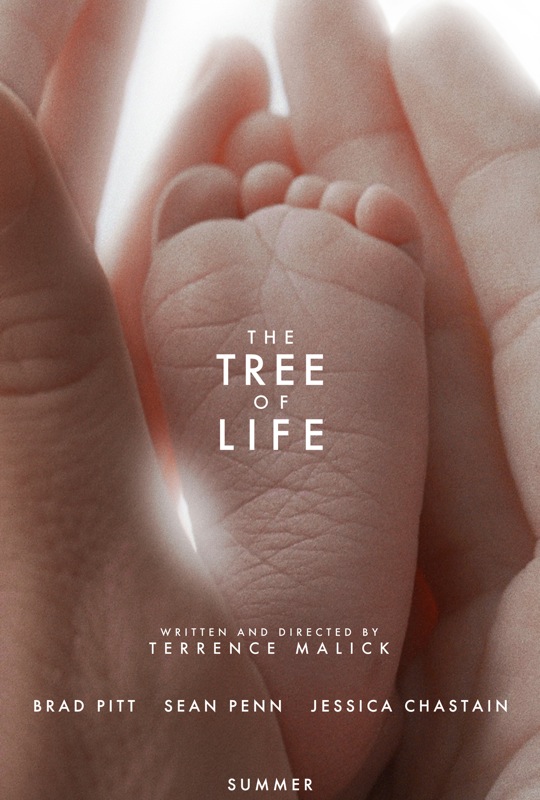 I can see why many people think this is a life changing film. I can see why it inspires people to reflect on their own life and their place not only in the world. I can see that it is very, very beautiful. I still didn’t like it.

For me, this wasn’t a feature film; it was an experimentation in alternative methods of storytelling. Sort of. There wasn’t really a story, but an exploration of a life. Or several lives. I got somewhat confused between who I was watching at times, and why. And the whispering – it was like watching a Hungry Jacks ad from the mid-ninties. I could have used less of the whispering and even a bit less of the constant overpowering music. Whilst many people will find this a beautiful film that changes their lives, I reckon that there are equally as many people who will find this film wanky, annoying and far too long. But, if you hate it that much, even ninety minutes will be too long.

It would be beautiful to watch this film at an outdoor cinema in some gardens on a balmy evening with a lot of wine – unless you don’t like it. In which case, you may get kicked out for shouting obscenities at the screen.

It’s been a couple of days since I watched the film, and while I still didn’t like the way it was structured or appreciate the point of it, the beautiful images keep flashing into my head. And I’m enjoying them, despite myself. But one thing keeps coming back. What the hell was all that with the dinosaurs and stuff about? It was awesome, but why was it there?

Tree of Life was nominated for Oscars for Best Achievement in Directing (Terrence Malick), Best Cinematography and Best Motion Picture of the Year.