Craig Schwartz (John Cusack) is a puppeteer who lives with a menagerie and his wife, Lotte (Cameron Diaz), but he is depressed, he is unemployed, and he ends up taking a job for filing in a strange office on the 7½th floor. Here, he discovers a small door that leads him into a portal that goes directly into the brain of John Malkovic (played by himself). Then there is Maxine (Catherine Keener)who is out to make a buck and maybe fall in love.

Such a strange film – I loved it so much when I first saw it, and seeing it again now probably fifteen years later, I’m surprised at how much I had forgotten. I think I enjoyed it even more on the re-watch – it is just so very, very strange. The group of elderly folk who need the portal, or the woman in the office who constantly mishears people but blames it on them – magnificent. If you haven’t seen this, and you’re up for a strange movie adventure, here you go!

Being John Malkovich was nominated for Oscars for Best Actress in a Supporting Role (Catherine Keener), Best Director (Spike Jonze) and Best Writing, Screenplay Written Directly for the Screen. 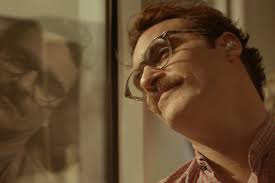 Theodore (Joaquin Phoenix) is in an unusual writing job and leads a mostly solitary existence after the break down of his marriage.  He purchases a new operating system is released which contains artificial intelligence, developing to meet the every need of the user, and quickly, he starts to fall for ‘Samantha’ (voiced by Scarlett Johansson). What are the limitations of a personality that is not human and has no real physical presence, and yet has the intelligence and ability to communicate in a real manner?

This film is beautiful. Theodore is a very sensitive character, flawed and hurt. His interactions are real, and his confusion and wonder at  the whole situation is genuine and totally engaging. The film really has me thinking about the moral and ethical limitations of this type of artificial intelligence, in a similar way to the excellent Swedish television series Real Humans.