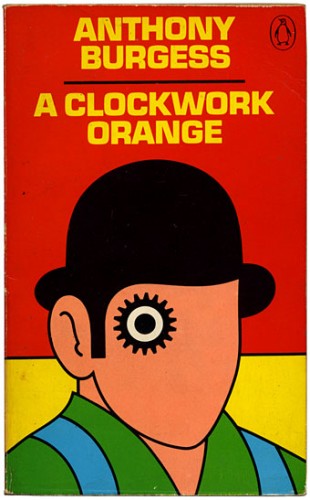 A Clockwork Orange by Anthony Burgess

Alex is a teenage thug in a future world. He and his gang drink and take drugs and go out to attack and rape whoever they can. But his gang are sick of him taking control and set him up to be sent to prison. After two years in prison, he ends up in an experimental program that uses a combination of drugs and extremely violent footage to bring about waves of extreme nausea, stopping any ability for the offender to re-offend. However, thrown back out into society, Alex is lost and vulnerable to those who, justifiably, want to harm him.

It’s a tough read because Alex, who narrates the books, uses a lot of ‘Nadsat’ terms – that is, a made up teenage talk. There is a glossary at the end of the book, but I battled through without it as I was reading it on a Kindle. Generally, it wasn’t hard to figure out what he meant, but it did require some work. The use of nadsat distanced me from a lot of the violence, I think, although I remember some of the images from watching the movie many years ago. What I found most interesting, and it will take a re-watching of the film to confirm this, but I suspect was left off the film, and that was the final chapter. This suggests that the only cure to this thuggery is time and age, and I imagine if this is how it was read, it would have been hugely controversial as it is almost allowing their behavior. 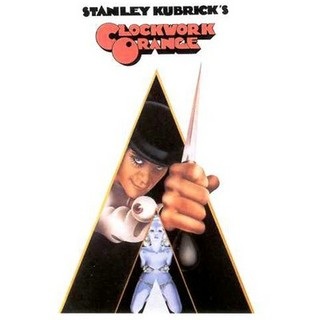 Indeed, it seems that the last chapter of the book is not addressed in the film, but there is certainly enough sex and violence in this film to make it challenging – at lease, in the early seventies. I recall that even the director of the film, Stanley Kubrick, had some issue with it. A quick and not at all thorough bit of research revealed that Kubrick’s issue came after several copycat crimes occurred and he received death threats. He was able to pull the release of the film in the UK but it still received Oscar nominations.

The violence in the film is so melodramatic that now it comes across as almost comical, which probably says an awful lot about how graphic depictions of violence, including rape, are nowadays. I’d say it is still an extremely good film that makes very interesting points on culture and punishment, but I cannot imagine it having the type of impact that it would have upon release almost forty-five years ago. 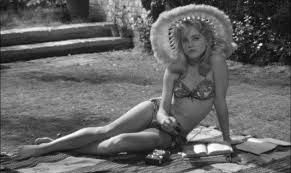 Lolita is a creepy tale. The story of a man who, becoming obsessed with a young girl, marries her mother, then when the mother dies in an accident, runs away with the young girl, initially lying to her that her mother is sick, then eventually admitting the truth. It is made ever so much more creepy by starring James Mason, who manages to play Humbert Humbert, the protagonist, so marvellously. Add to this Peter Sellers playing the even more creepy Clare Quilty and you really have a creep fest.

The thing that is very difficult with Lolita both as a book and a film is that the power appears to be with the young girl. She flirts and seems at times to have the male characters totally wrapped around her finger. The audience is made uncomfortable because at no stage does a responsible adult say (and mean) “No, you are a child”. For a creepy tale of horrible events, it is a truly excellent film.

Lolita was nominated for an Oscar or Best Writing, Screenplay Based on Material from Another Medium. 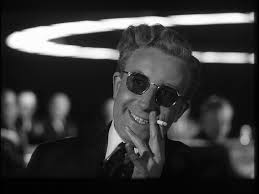 I’ve not seen a lot of Kubrick’s work; certainly, this is something that I intend to rectify. However, I’ve always loved the work of Peter Sellers, and not least in this film. Young uns may think that playing multiple comic characters in a film is the territory of Eddie Murphy or Adam Sandler; oh no. This is the best example of it, still holding strong after almost fifty years.

The plot; Brigadier General Jack Ripper (Sterling Hayden) goes a bit nuts and uses an ill-conceived safe-guard to set a series of US planes heading towards Russia to drop nuclear weapons. Unable to contact him, President Muffley (Peter Sellers) gathers his advisers, including the hilarious General Buck Turgidson (George C Scott) to figure out a plan. They contact the Russian President by phone to advise and apologise only to discover that the Russians have installed a doomsday device which means that any nuclear attack on Russia will set a large number of weapons off toward the US and other targets. It comes down to a British officer who is on exchange working under Ripper, Group Captain Mandrake (Peter Sellers again) to try to reason with the insane man, or else everyone will be relying on the advice of Dr. Strangelove (Yup, Sellers again), an ex-Nazi in a wheelchair with one arm still loyal to Hitler.

There are so many great moments and great lines in the film. So very, very funny and having recently read and watched On The Beach, it was nice to see a humourous take on a nuclear holocaust. Black humour, of course, but humour non-the-less.

Dr. Strangelove was nominated for Oscars for Best Picture, Best Actor in a Leading Role (Peter Sellers), Best Director (Stanley Kubrick) and Best Writing, Screenplay Based on Material from Another Medium. 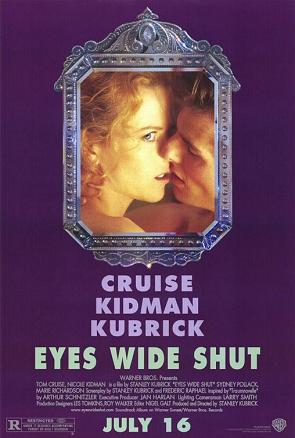 Dr William Harford (Tom Cruise) is highly respected in New York, has a beautiful wife, Alice (Nicole Kidman) and a rarely seen child. But when, stoned, she over-reacts to his comments and then admits that she was once attracted to someone else, his life goes off the rails. He stumbles into a world of sexuality and intrigue, culminating in sneaking in to a massive, mysterious sex-party/weirdo cult event. After being discovered, he tries to find out more but realises that his life and his family may be in danger.

I recall seeing this at the cinema back when it was first released. It was exciting – a new Kubrick, with the golden couple that was our Nic and her superstar husband, Tom. Even those who perhaps didn’t really love Tom or Nic could surely get something out of a Kubrick masterpiece? All I remembered prior to this viewing was a lot of nude women and men in masks and cloaks, and a very annoying sound track consisting of two notes on a piano. And hating it, thinking it was terrible and a waste of time. Sometimes, it is not worth revisiting bad films.

There was so little to enjoy about this film. The writing was awful; the conversations stilted and unrealistic, the sense of danger came from nowhere. I did not believe any of the characters would behave as they did. What’s more, I couldn’t understand why, if William was so keen on discovering more, he would suddenly stop looking when he did. The acting was terrible, especially Nicole Kidman’s portrayal of drunken and/or stoned sexuality that was almost painful to watch. The film runs for 159 minutes, and I think about at least half of that were long, static shots of people’s faces as they barely react to things. Kubrick was wonderful, but obviously, not always. 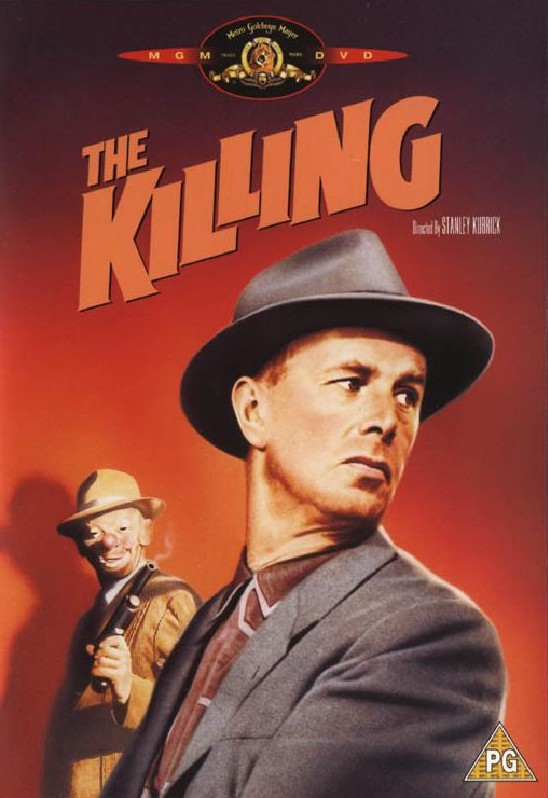 The Killing is a heist film – Johnny Clay(Sterling Hayden)  is organising to rob a racetrack. He has arranged men on the inside and has everything timed down to the minute. But can everyone be trusted?

What I find fascinating about heist films is the way the director gets the audience on the side of the criminals. These are the guys who are prepared to kill just for money. Rarely is the money to be used for some noble cause – it’s just to make the criminals rich. Still, every step of the way, I was barracking for Clay to get through. Being a Kubrick film, things don’t happen the way you’d expect, and whilst I love a good Ocean’s Eleven or The Thomas Crown Affair, it’s nice to see things messed up a bit. 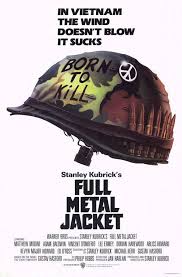 From the opening shot with the actors playing the Marine recruits having their heads roughly shaved at the start of the training, Kubrick captures the life in US service during the Vietnam War. It follows the recruits being relentlessly tormented by Gny. Sgt, Hartman (R. Lee Ermer) through their training then following them to Vietnam; to the impatience of life on base to the horrors of life in the field.

There really can be no denying that Kubrick was a master filmmaker. I wonder if a film now could be made with the long, drawn out establishing shots like this. Kubrick captures so many stages of life as a Marine. The destruction of the spirit of less capable recruits like Private Leonard (Vincent D’Onofrio); the anger and bloodlust of some in the field like Animal Mother (Adam Baldwin); the speculation and curiosity of the observer journalist/soldier like Joker (Matthew Modine). It’s a beautiful and horrible yet magnificent film.

Full Metal Jacket was nominated for an Oscar for Best Writing, Screenplay Based on Material from Another Medium.