You know the story of Jack and the Beanstalk? Jack is dumb and poor and trades his cow for a handful of magic beans that his mother throws out the window and in the mornign a beanstalk has grown to the sky, and so Jack climbs it and steals a whole bunch of stuff from them and then he cuts it down and the giant dies. Well, let’s rewrite this a bit. First, the giants have attacked the world once and were driven off by a king wearing a magic crown and have remained above the clouds for a really long time. But now, due to a couple of silly mistakes and the scheming of the nasty Roderck (Stanley Tucci), there is the chance for the giants to return. It ends up being up to the kings men, notably Elmont (Ewan McGregor) and Crawe (Eddie Marsan), helped by Jack (Nicholas Hoult) who was saving Princess Isabelle (Eleanor Tomlinson) to kick the giants’ butts.

I totally should have loved this more. Apart from Stanley Tucci, Ewan McGregor, Nicholas Hoult and Eddie Marsan, all of whose performances I generally really enjoy, there was Ewen Bremner, Ian McShane and Warwick Davis. The story should have been good enough to carry me along. Yet there was something lacking. Something that I just didn’t love. Was it that yet again, there was only one female character? And that while she had a bit of personality, essentially she was just another princess waiting to be rescued? Or did it all just feel a bit forced? 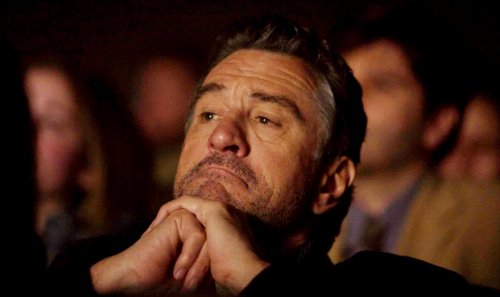 Ben (Robert De Niro) is a film producer whose latest film, staring Sean Penn (playing himself) tests poorly – especially the killing of a dog at the end. He needs to fix it, which takes all kinds of maneuvering. On top of this, he is dealing with the end of his marriage with Kelly (Robin Wright), his teenage daughter Zoe (Kristen Stewart). Plus, the star of his next film, Bruce Willis (also playing himself) has grown an ugly beard and will not listen to pleas to sort himself out before shooting. Even his manager, Dick Bell (John Turturro) cannot sort it out (in-between his serious stomach issues).

It’s a film that is full of stars and Hollywood inside stuff, and I reckon that it is entirely possible that people within the industry would relate to it a lot, even if they may not like it. Me? I found it a bit interesting, and somewhat entertaining, but it didn’t totally grab me.

The twelve districts of Panem are ruled by the Capital. As a punishment/reminder of a past war, the Hunger Games are held each year. Two teenagers, one male and one female, are drawn from each district and put into a massive arena (as big as a whole separate world) two fight to the death. When Katniss (Jennifer Lawrence) volunteers for her sister Primrose (Willow Shields), she and Peeta (Josh Hutcherson) need to work together to survive.

Films based on books can be tricky, making the right choices about what goes and what stays in; what works best for the story of the film and what will work to tell the rest of the story. I felt that this representation was pretty darned good. The casting was fantastic; Jennifer Lawrence, Woody Harrelson, Stanley Tucci, Liam Hemsworth, Lenny Kravitz, Donald Sutherland. I thoroughly enjoyed it. 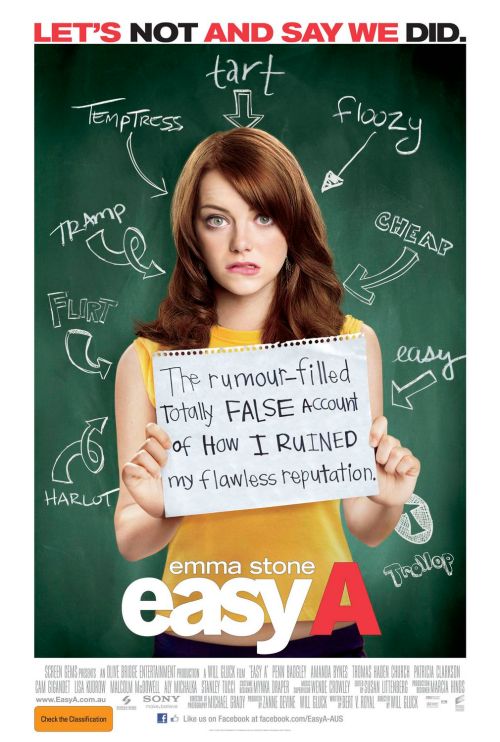 Olive(Emma Stone) is your average high school student – working toward college, keeping to herself, not noticed by most of the school. Until a rumour gets out that she has slept with a college guy, and suddenly she gets the reputation of being the school slut. Rather than challenging this, she uses this reputation to help others; her gay friend hides his true sexual leanings; an unpopular, ugly guy starts to garner female attention after people think he has hooked up with Olive. It’s not altruistic, though; Olive takes cash or vouchers for her favours. She starts to dress to the character, however eventually it becomes too much for her and she needs to find a way out.

It’s a good high school film. One of those films where the parents are way too cool and ace to be believed and that behaviour that almost certainly would not be tolerated in a school is ignored. (Or at least, at this school, that seems extremely middle class and conservative. Conservative enough that the concept that one student has had sex can stop the whole school in its tracks) I think it would probably be a good film for high school students when looking at bullying and reputation – along with Mean Girls.

Perhaps I need to come up with a name for the films that I have never watched because I’ve expected them to be awful, but am pleasantly surprised when I finally do take the time to enjoy them. The Devil Wears Prada definitely fits into this category.

Andy (Anne Hathaway) is a journalism graduate who somehow scores a job as the assistant for Miranda Priestley (Meryl Streep), the incredibly demanding and rude head of Runway magazine. She doesn’t fit in as she doesn’t wear the right clothes, she’s not super-model thin enough, her hair is wrong, the whole lot. Then she has a word to one of the stylists, Nigel (Stanley Tucci) who dresses her right and she works crazy hard to make sure she has completed every ridiculous request that Miranda throws at her. Of course, she loses all her friends and boyfriend in the process, and Runway and Miranda become Andy’s new family – an unappreciative, unwilling family. Andy needs to make a decision about where her morals stand.

I didn’t really love Anne Hathaway – well, I didn’t really know much about her – until Les Miserables. Whilst I didn’t totally love Les Miserables, I thought her performance was pretty darned impressive. She doesn’t have the same opportunity to really show off her acting chops in this film, but she does exactly what the role requires and does it well. Of course, Streep is marvellous in this. I wonder if it is hard being Meryl Streep, being so very, very good at what you do.

This is not a film to watch to challenge your views on the world, but it’s worth a watch.

I think this is it. I think finally I have managed to see all of the released Marvel films; well, this bunch, the bunch leading in to The Avengers. According to Wikipedia, this lot comes under MVL Productions LLC or Marvel Cinematic Universe.

In The Avengers, Captain America was my least favourite character. He had so much make-up on that it looked ridiculous, and I didn’t know his origins. I had little time for him. But, this crazy mission of mine to see them all led to watching this film, and I am so glad it did! Captain America is awesome.

The majority of the story is set in 1942. America is joining the fight in Europe against the Nazis and Steve Rogers (Chris Evans), is attempting to be a part of it. However, he is a small man who suffers from a wide range of illnesses and is rejected again and again. Finally, he is spotted by Dr Abraham Erskine (Stanley Tucci), a German scientist who has moved to the US and works for the US army. He tests his new technology on Steve Rogers, developing his muscles and motor skills to turn him into a super soldier, Captain America. The program is infiltrated by HYDRA, the organization headed by Nazi Officer Johann Schmidt (Hugo Weaving) who has obtained a Tesseract providing him with powerful weapons and the ability to conquer the world. Captain America must save the day.

Perhaps it is from a childhood of Indiana Jones, but I love a good action film where the Nazis are the bad guys. I think I liked this even more because it was not just the Nazis, but this super group of Nazis. Again, there is an amazing cast and awesome effects, and it leads directly into The Avengers. There is another Captain America due out in 2014. I can’t wait.