Based on the book by Ernest Cline, this film is about a dystopian future world where everyone is obsessed with a computer challenge that has been running for years with a prize of huge wealth. The challenge is to know everything about the popular culture loved by the creator, mostly 80s stuff.

While in the book, I found the constant references to the 80s a bit much, it worked really well in the film. And being directed by Stephen Spielberg meant it was had a lot of the feel of the popular culture that it was referencing, It was pretty decent.

Kay Graham (Meryl Streep) is the owner of the Washington Post in the early seventies, dropped into the role after the death of her husband who was appointed by her late father. When the opportunity comes to be part of an expose that involves breaking the law and putting her fortune and even her freedom at risk, she is torn between the advice of her board and her editor, Ben Bradlee (Tom Hanks).

It’s a slow start, with a lot of very necessary character and background information, and while I was interested, I wasn’t all that compelled. But as the action heated up, I was on the edge of my seat. I was so tense, feeding from the high energy and stress onscreen. And at the end, I felt down. Looking at the sixties and seventies, people really seemed to care about the government lying to them. Now, it seems that it doesn’t matter. People in power lie blatantly in ways that are easily proven and yet there is no outrage, no consequences. Such a timely film.

At the Olympic Games in Munich, eleven Israeli Olympic team members were taken hostage and killed by the Palestinian group Black September. This film is based on the book Vengeance: The True Story of an Israeli Counter-Terrorist Team, and is based on claims of a man that he was a Mossad agent who worked with a group to kill those involved in the events at Munich. As with any of these ‘based on real events’ type films, I have no idea what is real and what is fiction.

What I found particularly interesting in this film was the performance by Eric Bana as Avner, the leader of the group. He has levels of complexity that make this film far more a drama that an action romp. He is challenged by the task he has been given and about how to fulfil it, and has a strong moral code. It’s certainly not an easy film to watch, but for me, it is one of Spielberg’s better films. (Then again, I don’t like the family-friendly cheesiness of many of his works). 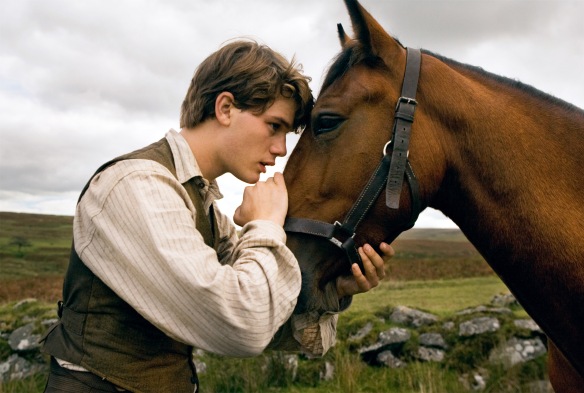 As a youth, Albert (Jeremy Irvine) loved and trained a horse on a nearby farm. Then his drunken dad (Peter Mullen) bought it for far too much, to the chagrin of his mother (Emily Watson). But Albert gets the horse to work and everyone cheers him in the rain. Then war happens, and the horse is taken from them. Albert ends up fighting. Things are nasty and people are badly hurt. So is the horse.

I think this was a terrible film. Apparently, it was an amazing stage play, and that came down to fabulous puppetry to create the horse. But I found the start of this film absolute trite, and then the war parts were pathetic. Although the animals were treated badly, and that was unpleasant to watch, but probably the closest thing to realism you would find. I thought this was really a terrible, terrible film.

As a little kid, I loved reading Asterix comics. I know, I know, that’s not Tintin, but they always looked kinda similar – same size and shape, kind of. Yes, I do judge a book by its cover. That’s just me, I’m afraid. When I attempted the Tintin comics, I didn’t really get them. There wasn’t much humour and I wasn’t really interested in the whole mystery aspect. I tried again a few years later and I enjoyed them a lot more – still not as much, but I liked them.

I was pretty concerned when I heard that there was going to be a live action motion capture animation film. Was it going to look as crap as that Tom Hanks Christmas film many years ago? I still haven’t seen that one – Polar Express, I believe. I just couldn’t get over that scary face from the trailer. I still have nightmares.

As it happens, Tintin is the absolutely perfect film for this technology.

Herge creates beautiful characters in his books, often with slightly enlarged features, and live capture animation allows these characters to come alive. If you are familiar with the comics, you will share my delight in seeing these characters brought to life – whether it is the sailors or the absolutely wonderful Captain Haddock.

I find it quite hard to critique the acting in the film as the animation dominates the appearance of the actors, and so I found myself relying on the voice to convey the character. Certainly, Andy Serkis portrayed a marvelous Haddock, and Nick Frost and Simon Pegg gave Thompson and Thomson voices exactly as I’d always wanted to hear them, but how much of the credit of their performances should be attributed to the animators? It’s an interesting thought.

Recently, Tintin won the Golden Globe for Best Animated Film, and it was deserving of this accolade. The animation is wonderful, and the story is well created, taking elements from several of the books. It is filled with action and humour and after a first watching, I was more than happy to go again with my nephew. The second watching was even better – oh, and I’d recommend a big screen, go for 3D and sit right at the back. It’s worth it.

The Adventures of Tintin was nominated for an Oscar for Best Achievement in Music Written for Motion Pictures, Original Score (John Williams) 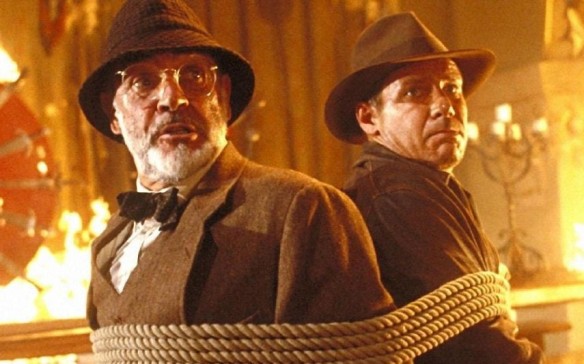 Here’s another of the films I watched over and over as a teenager. The humour, the action, and of course, the sticking it to the Nazis – it’s got it all.

Indiana (Harrison Ford) finds out that his father, Professor Henry Jones (Sean Connery) has gone missing whilst tracking down the Holy Grail for collector Walter Donovan(Julian Glover). The Holy Grail has been Henry’s life’s passion, and luckily his research helps Indiana track him down, but of course the Nazis are about and that doesn’t make anything easy.

Watching it again, I think it is Sean Connery that makes this film; he and Harrison Ford together. I can’t recall another film where he gets to be so funny; I think of him as suave and collected and sometimes angry, but not funny. This film truly got Indiana Jones back on track after the disaster that was Temple of Doom. Even the opening sequence, with River Phoenix as the young Indiana gets his morals back on track – it’s all about getting things in museums, not making a profit. Onya, Indy.

Indiana Jones and the Last Crusade won an Oscar for Best Effects, Sound Effects Editing and was nominated for Best Sound and Best Music, Original Score. 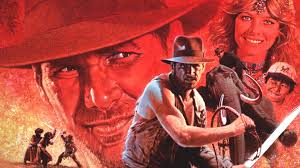 The story goes that Indiana is selling the remains of the first Emperor of something to a guy in Shanghai for a big diamond. He is double crossed and ends up drugged and dragging an American singer with him out of the club, through town driven by a small Chinese orphan Indiana has found and onto a plane. However, there are issues here, too, and the planes crashes, leaving them stranded in India where they are sent on a mission by the townsfolk who find them. Of course, it is not easy, and there is some screaming and stuff.

Firstly, why was Indy suddenly selling the items for profit? At least in the first film he was avoiding the Nazis. But now he’s into the cash? Second, why have such a cool, strong female lead in the first film (even though she had to be rescued and stuff, she wasn’t going to be pushed around), then a squealing and totally unlikable woman in this one? And what is the story with the Chinese orphan that Indy essentially kidnaps? He’s cute and says quirky little humourous things, but it screams of trying to appeal to a kids audience, and Indiana Jones films should be better than that. My theory is that every other Indiana Jones film is good – from memory, Last Crusade is fabulous, but then the more recent Crystal Skull was appalling. I’ve heard (god forbid) that there are plans to make a fifth. By this theory, it’ll be ace. Or totally destroy this theory.

Indiana Jones and the Temple of Doom won an Oscar for Best Effects, Visual Effects and was nominated for Best Music, Original Score.

Some films you need to watch again to remember how truly magnificent they are. Raiders of the Lost Ark is one of these, without a doubt. It’s got everything; running, explosions, fighting and humour – oh, the humour. Here’s a recap if you have no idea of what I’m talking about.

Indiana Jones (Harrison Ford) is an archaeology professor at a university. But he also obtains hidden ancient treasures. Now, if he was just taking things for the sake of taking them, or for money, that wouldn’t be so ace. But he’s getting them before the Nazis, and so he is a hero. Oh, yes, it’s set pre-WW2. Hitler is about, but the war hasn’t started yet. Indiana Jones needs to get a pendant from the Marion (Karen Allen), daughter of a fellow adventurer. He then needs to get the writing on it deciphered, make a rod, go to a map room in the middle of a dig run by the Nazis, find the location, dig up the ark and escape with it. The only help he has is Marion and his mate Sallah (John Rhys-Davies) and he is against a nasty archaeologist, Belloq (Paul Freeman) and a whole heap of Nazis.

The whole thing is action, action, action, with a tiny bit of romance for fun. It’s awesome and fun, and if you haven’t seen it, do. I don’t know anyone who does not like Raiders of the Lost Ark.