Sandy (Olivia Newton-John) is an Australian teenager starting new at Rydell High for her last year of school. She makes friends with the Pink Ladies and laments her summer love with Danny Zuko (John Travolta)- only to discover that he’s the leader of the toughest gang in school. Can they rekindle their love? There’s only one way to find out. A lot of singing. And then the very problematic ending which doesn’t really make sense, but kicks off one hell of a singing finale.

Star-crossed lovers? Hmm… no… maybe. I mean, Sandy’s pretty middle class and Danny’s in a gang, but I guess trying to tell a class film in a bright and cheerful musical has its flaws. Seeing a recent stage production of this and then re-watching the film (which I watched almost non-stop as a child – apart from Stranded at the Drive-In, Totally Devoted to You and There are Worse Things I Could Do which I always fast forwarded) made me wonder how this same story would play out as a gritty drama. Or perhaps I should just watch gritty drama. 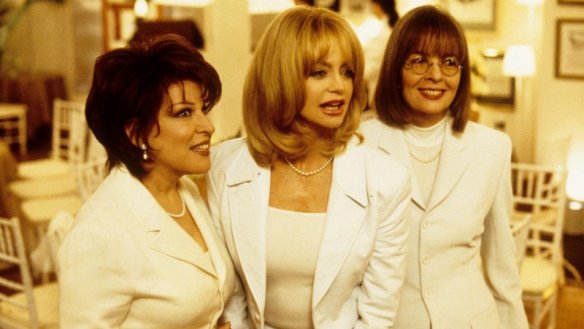 When their college friend Cynthia (Stockard Channing) commits suicide after her husband remarries a much younger woman, friends Elise (Goldie Hawn), Brenda (Bette Midler) and Annie (Dianne Keaton) realise they have all been thrown over by their husbands in the same fashion. Instead of risking bottoming out, they support each other in seeking creative revenge.

One of the characters mentions that what they are doing is just what people expect – and it is ugly and makes them seem very ugly. And there is an aspect of that – but what it seems to be more about is three women who had become defined by their marriages, none of which were that healthy, who stand up and take charge of their lives. They are not prepared to just let their ex-husbands treat them like crap but it become about more than simple revenge. Oh, and did I mention that it is a really funny film with some great female characters? Well, it is.

The First Wives Club was nominated for an Oscar for Best Music, Original Musical or Comedy Score.