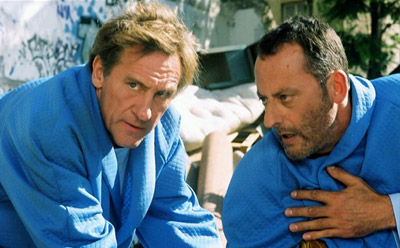 Ruby (Jean Reno) has stolen a lot of money from a gangster and ended up in prison with Quentin (Gerard Depardieu), the most annoying man in the world. While Ruby is plotting to escape, Quentin follows, dreaming of the pub they will run together one day; The Two Friends. Quentin hinders as much as he helps, and neither the police nor the other crooks are any good at taking charge.

It’s silly funny, with lots of fabulous slapstick and ridiculousness (Quentin manages to injure Ruby’s leg just after fixing his dislocated shoulder), though it is very dated. The cross dressing and homophobic slurs would have been perfectly in place in the sixties and seventies, but 2003? At least it was enjoyable to watch Jean Reno and Gerard Depardieu together on-screen.