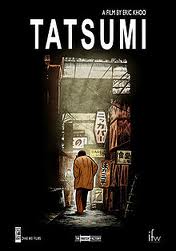 If there was ever any question in your mind that cartoons are just for kids, this is a good film to watch. Yoshihiro Tatsumi was a child when he started drawing for magazines and competitions, but went on to invent a new style of comic – gekiga. These comics were for adults, and contained adult themes and content. This film on Tatsumi has two main components – five of his short films, and the transitional sections. The transitional sections are made up of Tatsumi’s life story – narrated by him and also fully animated.

My only criticism is that there was no clear end to some of the stories, and so it took a moment to recognise that the film was no longer in a short film, but was back to Tatsumi’s life story.

I found the film absolutely fascinating. I had not been aware of Tatsumi or the gekiga style of comic-art prior to this, and it is compelling. The stories that were told showed the horrors of the days after the atom bomb destroyed Hiroshima, as well as the day-to-day struggles of individuals. It seemed to me that he did not have a very good view of women, as they seem to all be whores or bitches, but then many of the men were also far from ideal. I guess when you are looking at the nitty-gritty of life, things can seem ugly.